The story over the holiday weekend that a U.S. soldier killed in Afghanistan on Saturday, a member of the 75th Ranger Regiment and on his third deployment to the country, brings to light again the high cost of our continuing our presence there.

The members of the Special Operations Command are paying a very high price with continued deployments and are always operating in harm’s way. The tip of the spear is always going to bear the brunt of the fighting.

Sgt. Leandro Jasso was just 25-years old, was wounded by small arms fire while conducting combat operations in the Khash Rod District of Nimruz Province in southwestern Afghanistan, while trying to eliminate Al Qaeda militants in the area, the Department of Defense said on Sunday.

After being critically wounded Jasso was medically evacuated to the nearest medical treatment facility in Garmsir District in neighboring Helmand Province where he died of his wounds.

According to reports that are breaking, it appeared that the Afghan troops that Jasso was accompanying, accidentally shot him as they were assaulting “one of multiple barricaded al-Qaida shooters” as was reported by Stars and Stripes with witnesses on the scene.

Special Operations troops accompany their Afghan counterparts on missions, which puts them in much greater danger during the resultant combat operations. However, it is the main reason why they are so successful, as the rest of the military who are just in a “train, equip and advise” role.

The incident according to SOCOM press releases remains under investigation.

The Pentagon released information that said that Jasso was assigned to 2nd Battalion, 75th Ranger Regiment, which is part of the U.S. military’s Joint Special Operations Command at Joint Base Lewis-McChord, Wash. He enlisted in the Army in August 2012 and after passing RASP (Ranger Assessment and Selection) he was assigned to the 2nd Ranger Bn before attending Ranger School. At the time of his death, Jasso was serving as a team leader on his third deployment to Afghanistan. 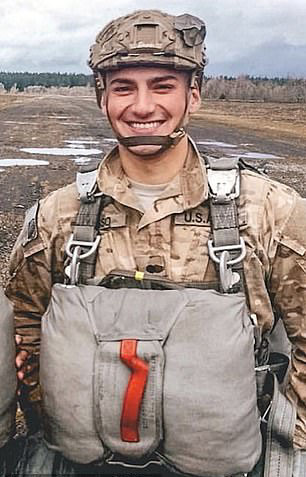 “The loss of Sgt. Jasso is felt by his family and loved ones, by all who served with him and by all on this mission to protect our country and our allies,” said Gen. Scott Miller, Resolute Support and United States Forces – Afghanistan Commanding General.

He is the 10th U.S. service member to be killed in Afghanistan this year and the second during the month of November.

Maj. Brent R. Taylor was killed earlier this month during an insider attack in Kabul. Taylor was the mayor of North Ogden, Utah, his hometown and was the father of seven children.

The U.S.military currently has approximately 14,000 service members training and assisting the Afghan government in their fight against extremist groups.

Nearly 2,400 American military personnel have been killed since the war in Afghanistan began in 2001; of which about 1,900 of them were killed in combat.

The remaining Western coalition forces are training and advising the Afghan security forces, which have been on the losing end recently against attacks from a much stronger Taliban and other terrorist groups. The U.S. military is now looking at whether or not they have severely underestimated the size of the Taliban.

Afghan President Ashraf Ghani said earlier in November that while 58 Americans had been killed in Afghanistan since the start of 2015, during the same time period, nearly 29,000 Afghan police and soldiers have been killed. This number is far higher than anything the Afghan government has acknowledged previously. This is also when Afghan troops took over primary responsibility for Afghanistan’s security from the U.S.combat troops.

Sunday marked the 17-year anniversary of the first American combat death during the early days in Afghanistan. Johnny Micheal Spann, a Marine vet working for the CIA Special Activities Division, was killed in a bloody prisoner uprising at Qali-Jangi fortress in Mazar-e-Sharif during the first weeks of the war. Spann was surrounded by a mass of Taliban prisoners while trying to interrogate them. He killed nine with his pistol and a rifle before being overwhelmed by a mass of prisoners who rushed him.

Two decades later, we lost another Special Operator in the fighting there that seems to have no end in sight. In fact, we are less closer to victory than we were at the end of November 2001.

Photos of Leandro Jasso: US Army