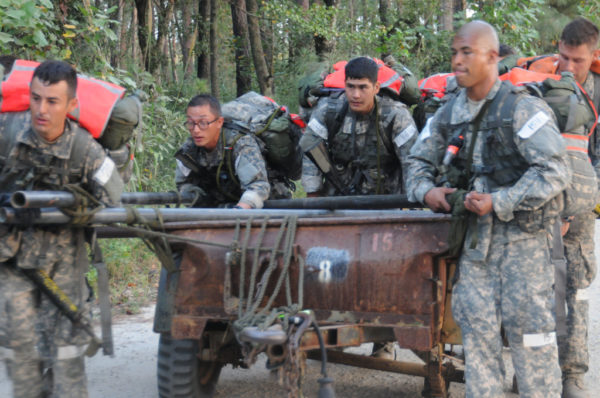 When you attend Special Forces Assessment and Selection (SFAS), if, and a big if you make it to the final phase which is called Team Week, there are certain skills that you will need to have to make it thru. And any team without them will certainly have a rough go of it if not fail to be selected.

We’re not talking about being a team player, never say quit and the other intangibles that go into being Selected. No, these skills are not only tangible but sorely needed during Team Week at SFAS. They are Knot Tying and Lashing. These are skills every candidate should know before they arrive at SFAS but is also one that at least back in the day was always in short supply.

How was that for being vague? However, if you are an ace at knot tying and lashing, you will be tasked heavily during events in Team Week. And if you aren’t an ace at these things, you should be. But many of the troops in their preparation for SFAS neglect these skills and arrive without knowing much if anything about them. It can come back to haunt you if an entire team isn’t very good at tying and lashing.

The JFK Special Warfare Center has a page dedicated to candidates for SFAS who are looking to get Selected and the knots and lashings that they should be required to know. And it would behoove every candidate to learn, not only the knots themselves but how they are used before getting to Selection. Here is a list of the required knots that SWC has published:

I would add in there a prusik knot and a girth hitch and I’m sure there are many others that many SFers or former troopers would add to the mix. But I’m just going off of the SWC list. So at a minimum, know these knots, what they are used for and how to tie them.

A great resource to use in knot tying is the Animated Knots website. They will illustrate a picture at a time on how to accurately and neatly tie all of the knots in question. The website may be accessed here:

Knot tying and lashing is a perishable skill that needs to be practiced or you’ll lose your knowledge pretty quickly. In writing this I was practicing with 550 (parachute) cord and a few of them I messed up after not having done it in so many years. So, even if you were familiar with these in the past, brush up on these knots and lashing before heading out to Selection.

As we mentioned above, many candidates ignore this small but important part of preparing for SFAS. You should incorporate this into a part of your routine until you can tie these knots and lashings in your sleep. And if you should find yourself the only member of your team during Team Week that is adept at this, congratulations.

You are guaranteed to be a busy, popular man before every event. But don’t shirk your duty to your team. Every man has his strengths and weaknesses. Don’t wait for the team to assign you the duty to tie knots and lashes. Volunteer and be proactive.

Remember, you are always being assessed.