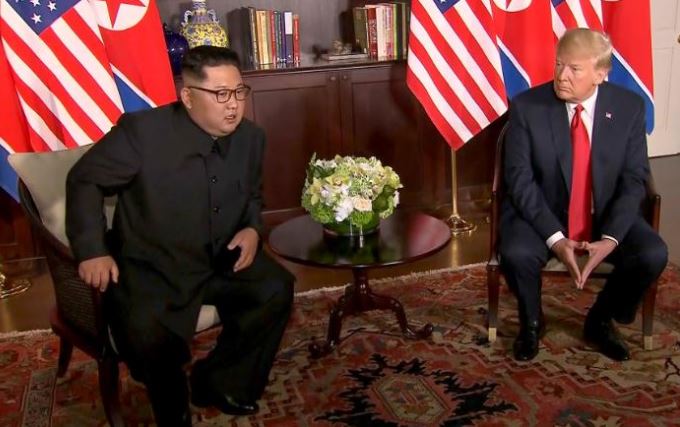 President Trump extended an olive branch to North Korea during the summit by agreeing to stop the large United States-South Korean military exercise, something Pyongyang has long called a “grave provocation” that is a preparation for an invasion.

The president’s revelation that he planned to put the “war games” on hold as part of the agreement with Kim to work “toward complete denuclearization of the Korean Peninsula.”

“Under the circumstances that we’re negotiating a very comprehensive complete deal, I think it’s inappropriate to be having war games,” Trump told reporters.

He also described the exercises as “very provocative” and said the move would “save us a tremendous amount of money.”

The next round of the joint drills were due to be held in August.

But both the Pentagon and South Korea’s military appeared to have blindsided by Trump’s statement.

U.S. Forces Korea said it had “received no updated guidance,” and Seoul said it would need to clarify the “intention behind his comments.”

Around 28,000 U.S. troops are based in South Korea. The U.S. and its allies maintain the drills are purely defensive in nature.

As well as putting the North on edge, the drills highlight the gulf between the capabilities of the South Korean military and its advanced U.S. ally, and the sizable but aging North Korean forces.

In December, joint exercises named Vigilant Ace involved some 230 planes and 12,000 U.S. military personnel in what was described as “a realistic air combat exercise.”

Despite signing the statement with Kim, Trump told reporters Tuesday that reducing the number of U.S. troops in South Korea was “not part of the equation right now.”

While the many detractors of Trump point out that he made concessions while the North Koreans promised only to do what they’ve promised before, it was extending an olive branch as a show of faith only. Those war games can be turned back on as quickly as they’re turned off.

It was a first step, nothing more, to generate further talks between the two sides.

Just a few months ago, there was worry about a nuclear confrontation between North Korea and the United States. That potential event seems much less likely today.