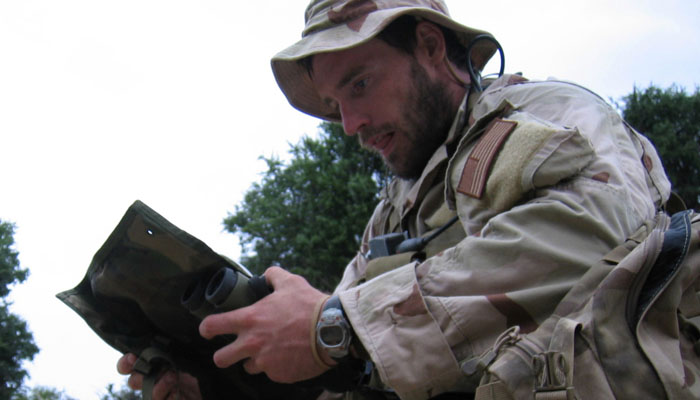 For any of our aspiring Special Operations Forces candidates and anyone else that is constantly looking for a way to push yourself and test your limits, I submit to you the “Murph Challenge”.

Lt. Michael Murphy was well-known in the Navy SEAL community for his fitness and physical toughness. He was posthumously awarded the Medal Of Honor for his selfless actions during Operation Red Wings in Afghanistan on June 28, 2005.

Murphy was the officer-in-charge of a four-man SEAL element, tasked with finding a key anti-coalition militia commander near Asadabad, Afghanistan. Shortly after inserting into the objective area, the SEALs were spotted by three goat herders who were initially detained and then released. It is believed the goat herders immediately reported the SEALs’ presence to Taliban fighters.

A fierce gun battle ensued on the steep face of the mountain between the SEALs and a much larger enemy force. Despite the intensity of the firefight and suffering grave gunshot wounds himself, Murphy is credited with risking his own life to save the lives of his teammates. Murphy, intent on making contact with headquarters, but realizing this would be impossible in the extreme terrain where they were fighting, unhesitatingly and with complete disregard for his own life moved into the open, where he could gain a better position to transmit a call to get help for his men.

Moving away from the protective mountain rocks, he knowingly exposed himself to increased enemy gunfire. This deliberate and heroic act deprived him of cover and made him a target for the enemy. While continuing to be fired upon, Murphy made contact with the SOF Quick Reaction Force at Bagram Air Base and requested assistance. He calmly provided his unit’s location and the size of the enemy force while requesting immediate support for his team. At one point, he was shot in the back causing him to drop the transmitter. Murphy picked it back up, completed the call and continued firing at the enemy who was closing in. Severely wounded, LT. Murphy returned to his cover position with his men and continued the battle. Murphy fought on, allowing one member of his team (Marcus Luttrell) to escape before he was killed.

The Murph Challenge is a simple but ass-kicking workout that isn’t for the faint of heart. It is supposed to be done wearing a 20-lb vest, however, unless you are in outstanding shape, and we stress the word outstanding… then try to do it and finish without it.

On the leaderboard for the Murph Challenge someone named Jennifer Rottkamp completed the entire challenge in 19:53 which is ridiculously fast and gets a huge amount of respect here.  Congratulations.

It was nice to see Hollywood action stars John Krasinski (13 Hours, Jack Ryan) and Chris Pratt (Guardians of the Galaxy, Jurassic World) get behind the challenge and offer to take part in it. They both posted on Social Media.

“We got a big group of people doing The Murph Challenge this year to celebrate Memorial Day and to memorialize our fallen heroes, especially Lieutenant Michael Murphy,” Pratt said.

Pratt also thanked Murphy for his brave sacrifice and service. “Thank you to Lt. Michael P Murphy and the millions of soldiers who have paid the ultimate sacrifice for our freedom. We live this life because you laid down yours, gratitude and prayers for all of you,” Pratt added.

“On Monday, remember to stop at some point in your day, think and say, ‘thank you,’ to all the brave men and women who laid down their lives for you,” Krasinski said. “If you want to do something a little extra special on Monday, or before then, take the Murph Challenge.”

https://t.co/V1psc13hjP Memorial Day is coming up.  Take a moment of your day Monday to say thank you to the brave men and women who laid down there lives for all of us. Wanna do a little something more? Take the #TheMurphChallenge !! @donsaladino @prattprattpratt @TheRock pic.twitter.com/BGAVJjnk6X

As we mentioned above, the challenge isn’t for the faint of heart, I didn’t need a stopwatch for my own time, but a calendar may have come in handier.

Kidding aside, much respect to Lt. Michael Murphy, RIP as on Memorial Day we paid homage to you and every other serviceman and woman who gave selflessly gave their lives for the rest of us in our country.

And if you’re looking for the next challenge, log-on to the Murph Challenge website and donate to the foundation and post your times. It is for a worthwhile cause.