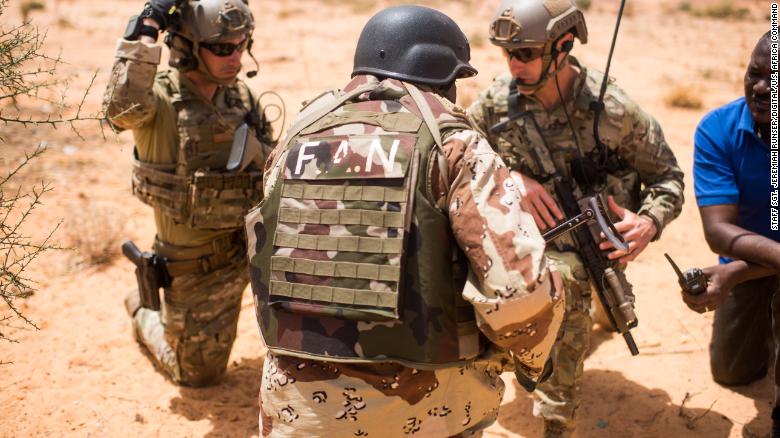 Op-Ed: The handwriting was on this one right from the very start. The Army tried to lay the blame on the ambush of the American Special Forces troops in Niger on the commander and NCOs of the SF A-Team before the last body had even been recovered off the battlefield.

The Army had issued a letter of reprimand to Capt. Michael Perozeni soon after the ambush in Niger in 2017 that killed four soldiers from the 3rd Special Forces Group. Perozeni and other junior officers and NCOs were singled out for punishment and were thrown under the bus, while senior leaders skated.

Jim Mattis, who was the administration’s then-Defense Secretary, blasted the letter of reprimand given Perozeni stating that MG Edwin J. Deedrick, Commander of the 1st Special Forces Command was unfairly calling out Perozeni and other junior leaders for punishment in the ill-fated mission while senior officers have been spared any ill effects from the fallout.

While Mattis was Defense Secretary, not only was Perozeni’s Letter of Reprimand (which is a career ender), rescinded, Perozeni was recommended for a Silver Star. Now with Mattis out as SECDEF, the Army has re-instated a letter of reprimand for Perozeni.

LTG Francis M. Beaudette, commander of the Army’s Special Operations Command, has issued a letter of reprimand for Perozeni on January 16, for not performing proper pre-mission training before the mission that ended up with his team ambushed, leaving four dead and Perozeni and another SF NCO were wounded and five Nigerien soldiers were also killed in the attack. They wasted little time (just 15 days) from the time Mattis left his position to re-instating his reprimand.

Perozeni’s original letter of reprimand was issued for failing to ensure his team was adequately trained before working with the Nigerien troops prior to deployment. That in itself is very flawed, for Perozeni had command of the A-Team for just a few weeks prior to deployment. With the current state of CS (chicken-s**t) mandatory training, ODA’s never have enough time to do the amount of training required. And blaming a Team Leader who had just a few weeks to prepare is ridiculous.

But when the DOD did an internal investigation into the Special Force team’s actions, Perozeni was recommended for a Silver Star. Initially, ODA-3212 planned a daylong “civil reconnaissance” trip on Oct. 3, 2017, to meet with tribal elders in the African countryside.

This is where the story gets crossed, prior to leaving the base in Ouallam, Perozeni received an order for his team to conduct a kill-or-capture mission involving Doundoun Cheffou, an ISIS militant believed to be behind the kidnapping of an American in Mali, among other things.

The order was given by another Captain, the same rank as Perozeni, who was filling in for his superior who was on maternity leave. Perozeni made his objections known straight away, saying that his team had neither the intelligence nor equipment to carry it out. However, his battalion commander LTC David Painter who was based in Chad ordered the team to move forward with the mission. Painter, it should be noted, was also recently reprimanded as well, after having not been earlier. He was slated to command one of the Army’s new SFAB battalions in Afghanistan in the coming months and now that has been changed.

The mission was scrubbed due to weather and the Green Berets moved on with their original mission that had been planned. But enroute the team’s mission was changed again. They were ordered to go close to the Mali border where they were to collect intelligence on what was reported to be Cheffou’s desert camp.

The next day, after stopping in Tongo Tongo for water, the ODA felt that the village was attempting to stall them. After leaving the village they were ambushed by a numerically superior force with heavy weapons. Perozeni and SFC Brent Bartels were wounded in the ambush while SGT La David Johnson, SSG Bryan Black, SSG Jeremiah Johnson, and SSG Dustin Wright were killed during the fighting. Reportedly the ODA killed 21 of the insurgents.

The only member of the senior officers involved in the action from the 3rd SFG to go unscathed was the 3rd SFG Group Commander, COL Bradley Moses. He is currently the Chief of Staff for the Army’s Special Operations Command and is slated to soon become a Brigadier General.

Perozeni has been made a scapegoat…twice, when in fact, his actions more than merit his bravery during the action. He, Bartells and several Nigerien soldiers tried to flank the ambush on foot. Once he realized that the insurgents were much more powerful than originally thought, he ordered the men back to the vehicles.

He was wounded and thrown from the back of a truck. Bartels, already wounded, drove through fire to retrieve him. Perozeni did what every Special Forces officer is supposed to do in that situation. He tried to pick up the pieces and lead his team out of harm’s way.

So, now the Army is trying to reprimand Perozeni for his actions while putting him in for a Silver Star, the third highest award for valor in the U.S. military.  The entire aftermath of a desperate battle by the Green Berets has turned into a fiasco. In the days immediately following the battle, the Army changed its story three times. At first, ODA 3212 was conducting “a recon mission”, then a training mission, and finally they conceded that it was a capture/kill high-value target raid. That should tell anyone all they have to know.

Then the Pentagon, in a 6000-page report on the ambush, the report blames the ambush partly on a culture of risk-taking, which is what Special Forces and all Special Operations units are in the business of.

Perozeni’s actions were not the cause of his soldiers getting killed on that day in October, and regardless of the fact that this reprimand was being placed only in his “local file” which is not supposed to follow him in his career, it is as wrong as rain. He and his team should be decorated, not reprimanded. The senior leadership fo SOCOM needs to step in and do the right thing here…and the troops are watching.