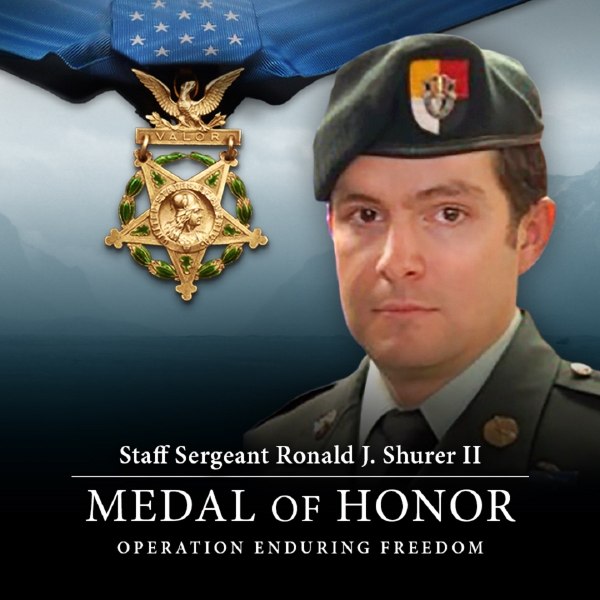 On Monday, President Trump decorated former Green Beret medic and SSG Ronald Shurer II with the Medal of Honor for outstanding heroism and bravery during a combat mission in Afghanistan in 2008. Amazingly enough, Shurer was once rejected by the military for a medical condition before he joined and was accepted shortly after 9/11.

Shurer saved multiple lives both American and Afghan, during a battle where the Special Forces troops were engaged with a numerically vastly superior insurgent force and were in danger of being overrun. But through his actions, not one of the critically wounded American men would die that day.

Shurer was assigned to the 3rd Special Forces Group and ODA 3336 when they were tasked with capturing a high-value target who was a part of the Hezebela Islami Gulbadin insurgent group. The mission took place in the remote Shok Valley in the Nuristan province of Afghanistan.

As the team of Green Berets and Afghan commandos were being whisked to the snow-covered ground along a frozen river and with a nearly vertical 60-foot cliff that the men would have to climb, through their imagery, the amount of enemy troops in the area suddenly became much clearer.

In an interview with the media last weekend, LTC Kyle Walton, who was a Captain and in command of the ODA, said the troops saw that “There were hundreds and hundreds of more compounds than we were able to see from our imagery.”

The men had to leap 10 feet from the CH-47 Chinook helicopter to the river due to the steepness of the terrain. They then had to assault straight up the near vertical cliff to where the high-value target (HVT) was supposed to be residing in this village.

Shurer recalled an eerie stillness as soon as the helicopter whooshed away. The men, all on foot with no vehicles or heavy weapons had just a shoulder carried a recoilless rifle as their biggest weapon.

Soon after the stillness was interrupted by 200-300 Afghan insurgents who rained down automatic weapons fire and rocket-propelled grenades on the vastly outnumbered team of Special Forces men and Afghan commandos.

Walton quickly broke his force into three assault elements but was immediately pinned down by the superior enemy fire that had wounded nearly all of the men. Shurer was initially at the base of the cliff, tending to several wounded Afghan commandos.

As President Trump would remind onlookers at the White House on Monday, “Blood was all over the place, it was a tough, tough situation to be in.” It was soon about to get worse.

SFC Dillon Behr, the A-Team’s Senior Radio Operator, was shot thru the hip and was bleeding out. Walton called for Shurer to come up to his untenable position on top of the cliff as there were too many wounded. They were pinned against the cliff and things were looking bad.

A-10 attack aircraft and F-16s screamed overhead, making close air support runs close to the Green Berets. They were trying to keep the insurgents pinned down but many of the Americans were peppered with shrapnel as well.

“When I called for Ron, there was a silence over the radio for a few seconds, because everyone realized what that meant — that it was bad,” Walton recalled. “He had to climb a mountain under fire with a couple other guys on the team. When he showed up, nearly everybody was wounded. We were under direct fire. We were pinned down with nearly nowhere to go except down that 100-foot cliff.”

Shurer raced to Behr’s side and was attempting to stop the bleeding of his badly damaged hip. He even went to the extent of jamming his fingers in the wound to stop the bleeding. Then a bullet ripped thru another Green Beret’s arm and hit Shurer in the head and arm. He recalled it being like getting hit with a baseball bat. Behr, thinking he was about to die, began to pray. Shurer slapped him across the face and startled the wounded man back to his senses. “Wake up! You’re not going to die today.”

As he called for the bomb drop, Walton says the last image he has is that of Shurer, draped over the wounded men, protecting them with his own body.

The bomb blasted the insurgents long enough to allow the Green Berets to make their escape down the cliff. As the dust settled, Walton recalls that the first image he saw was Shurer tending to the wounded.

Shurer had brought plenty of tubular nylon webbing that the team used to sling and lower Behr and the other wounded down the cliff to waiting helicopters to evacuate the team away from the firefight and live to fight again.

Another one of Shurer’s teammates, SFC Matthew Williams recalls that Shurer’s coolness under fire and the disregard for his own safety was the reason, so many of the men survived that day.

“His ability to manage an unmanageable situation and remain calm, collected and cool — always was that guy, hanging out or training or whatever,” he said.

“We’d been in engagements before, even on that deployment,” Williams added. “Nothing like that before. Luckily, we’re all incredibly well trained, we trusted each other, and it all just kind of worked for us that day. On our worst day.”

Shurer, when hearing the comments of his fellow A-Team members was humbled by the praise.“That means so much more,” he said. “I know these guys’ wives, their kids. Just knowing that … it’s very humbling for them to say that. Luckily, it all kind of worked for me to help those guys.”

Shurer and the nine other Green Berets were all awarded the Silver Star, the nation’s third highest award for bravery after the battle. But several team members felt that Shurer’s actions deserved more recognition.

Shurer left the military a year later and joined the Secret Service. He then later joined the Special Operations Division where he’s served since 2011. He was asked to go to the White House where the decision to upgrade his award to the Medal of Honor was kept from him. He was told it was a work-related visit. But then the President broke the news to him. During the ceremony, President Trump tapped him on the shoulder and his comments echoed the impressiveness of Shurer’s exploits.

He’s a warrior,” Trump said. “For more than six hours, Ron bravely faced down the enemy,” Trump added during the ceremony. “Not a single American died in that brutal battle thanks in great measure to Ron’s heroic actions.”

A year ago, Shurer was diagnosed with Stage 4 Lung Cancer but he has continued to fight that disease with the same bravery he faced the enemy Trump said.

“He’s braved, battled, worked, he’s done everything he can, that cancer he’s been fighting it every single day with courage and with strength, and he’s a warrior,” Trump said.

The president added, “He’s the best dad and role model two boys could ever ask for.”

Shurer was accompanied by his wife and two sons, several of his 3rd SFG teammates and Afghan interpreters at the ceremony.