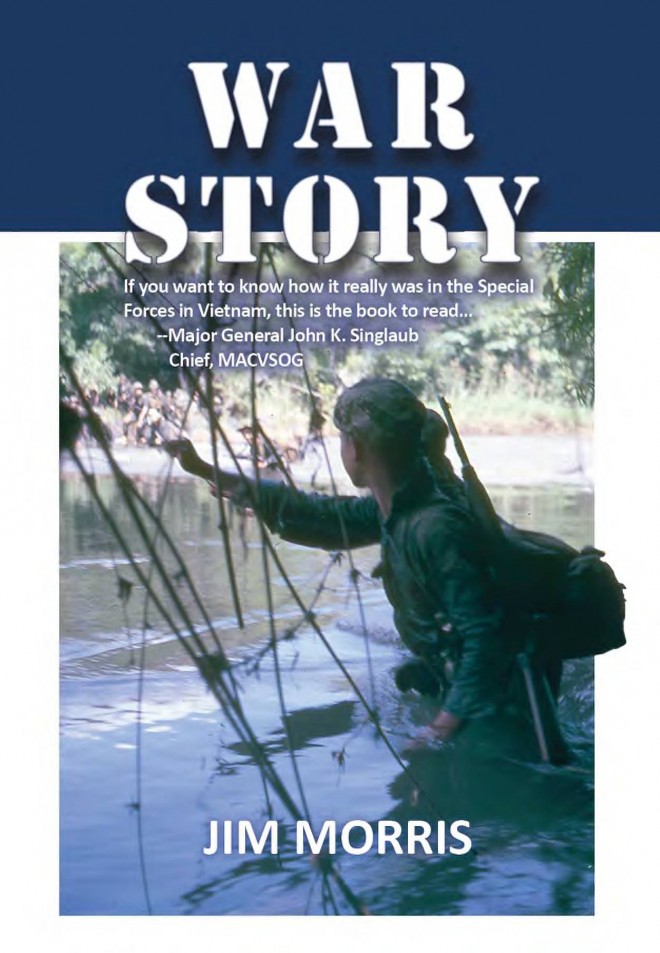 This book is dedicated to anybody
whoever died for something he
believed in, whether he was right
or not.

Before you turn a page in “War Story” and just read that small two-paragraph introduction you are hooked. Morris begins his book with a recurring dream when in a firefight in Vietnam, his left nut was shot off, which actually happened. But in his dream, which he had for years after coming home, he’d be killed in some ugly grotesque way, but one night he finally made it in his dream. He killed the enemy soldier and was finally at peace. As he says in the book, he was finally at peace and could go home now.

Morris’ book is a page-turning, can’t put it down look at one man’s experience in Vietnam while a Green Beret in the 5th Special Forces Group. It is arguably, (here there is no argument) the finest book on Special Forces in Vietnam.

Morris loved Vietnam, the people especially the Montagnard mountain tribesmen who he remained close to even after all of those years. The way he describes the scene upon arriving back in Vietnam is particularly captivating.

“I loved Vietnam more than any other place, for the beauty and strangeness of it. I always had a weird feeling in Vietnam, as though I was in the presence of exotic, occult happenings, as though I had arrived in a place where spirits prowled and sorcerers plucked at strings that controlled natural laws. I felt valid there, as though this were my place and my time and was where I counted. I was happy.

Morris grew up in Oklahoma and wanted to get into Special Forces, little did he know in 1963 when he got into SF that the war in Vietnam would be his calling. Morris served in Vietnam before the big American involvement began and was shocked when he returned to see so many Americans and military bases dominating the countryside.

He served in Special Forces when it was the kiss of death for the careers of the Captains and Majors who stayed for very long. But he found his calling and feared being promoted or else he’d lose his chance to command a Special Forces A-Team any longer.

He loved the ambushes and searching for the Viet Cong and North Vietnamese in the close-quarters battles in the jungle. On Morris’ website, he had an excerpt from his book where he described an ambush with his close friend, Montagnard, Philippe Drouin aka “Cowboy” on one such operation.

“We were all firing. Tracers from the thirty caliber weapons were ricocheting so high I thought the Cong were sending up flares. I fired up one magazine and then another. I kept firing. We all did. I wanted nothing to live out there. I felt nothing, neither elation nor horror, just the cold astringent calm.

I fired up five magazines before I stopped. Then everybody stopped and I called out, “Cowboy, let’s check out the stiffs.”

We got up and moved onto the trail. The bodies were lying to the left, to the right, on the trail, cut down running. I fired a round in the ground beside each man to see if he would move. None did. Cowboy moved beside me, covering.

When we came to the last one I moved in on him and he raised up, his arms extended, eyes wide. I said, “Good, we got a pris…”

Cowboy stitched him up the middle with his AR-15. He didn’t even twitch.

I said, “We could have got some good information from that guy.”

Morris minces no words on how the war was mismanaged and opportunities to win it was lost on the people in charge of prosecuting it. “There is only one way to fight a guerrilla war and that is to out-guerrilla the guerilla. You have to steal his political issues and his social issues and his tactics; and if you do that he has nothing left to sell and the war is won. It was so easy. Why couldn’t the bastards see it?”

One of the highlights of the book was the chapter where he spoke with an SF legend in Ludwig Faistenhammer. He was an expert on guerrilla warfare and was featured in Robin Moore’s book, “The Green Berets”.

There weren’t many like Ludwig. He was the character Fritz Scharne in Robin Moore’s The Green Berets. It was the story of how he managed to ambush a VC battalion commanded by a Frenchman… It was such an improbable story that I asked him if it was true. He said it was. “I lay awake nights dreaming up ways to get that son of a bitch,” he said. Part of how he set him up was by feeding him false information while playing tennis with him at the Cercle Sportif in Saigon.’

Morris was a guest on SOFREP Radio’s podcast this week with Host Ian Scotto and Jack Murphy and you can listen to it in its entirety here:

This brought me way back. As a young man as I was preparing to go to Special Forces training, I heard about Morris’ book and must have read it about 4-5 times enthralled. He was a big influence on me in those early years.

He wrote for Soldier of Fortune magazine and whenever he had anything in it it was a must read article.His Vietnam war stories and subsequent work covering some of the hotspots around the globe were manna from heaven for an aspiring Special Forces soldier.

For those young men of today who are planning on taking the road to go to Special Forces training, ensure that you put “War Story” on your must reading list. Although the copies are harder to come by today, on Amazon.com you can download a Kindle version of the book to your favorite device or laptop. It is worth the time and effort.

On the podcast, Murphy told Morris that if you substituted the words Communist or Viet Cong with the word “Terrorist”, the book would read much like what Special Operations troops face today in the hot spots around the Globe.

But “War Story” doesn’t delve into politics or policies, it is one man’s story of his involvement in the war. For him, it was a deeply personal one and he wanted to be involved in it all the way thru. Morris is a master storyteller and this will be guaranteed to keep you enthralled.