Today we remember the men of Operation Gothic Serpent who fought and died on the streets of Mogadishu, Somalia in what later became popularly known from the title of a book and film as “Black Hawk Down”

The operation was run by the U.S. Joint Special Operations Command (JSOC) and was commanded by General William F. Garrison. They organized for this mission as Task Force Ranger and It consisted of various special operations units from Army, Air Force, and Navy Special Operations Forces:

Their mission on October 3, was to plan and conduct an operation to move to the center of Mogadishu with the aim of capturing the leaders of the Habr Gidr clan, led by Mohamed Farrah Aidid. Included in that were Aidid’s foreign minister Omar Salad Elmi and his top political advisor, Mohamed Hassan Awale The assault force consisted of nineteen aircraft, twelve vehicles (including nine Humvees), and 160 men. The operation was intended to last no longer than one hour. In the end, it would last much longer.

The plan was that Delta operators would assault the target building (using MH-6 Little Bird helicopters) and secure the targets inside the building while four Ranger chalks (under CPT Michael D. Steele’s command) would fast rope down from MH-60L Black Hawk helicopters. The Rangers would secure the defensive perimeter around the target building to isolate it and ensure that no members of Aidid’s militia could get in or out.  Meanwhile, a column of nine HMMWVs and three M939 five-ton trucks (under LTC Danny McKnight’s command) would arrive at the building to take the entire assault team and their prisoners back to base. The entire operation was estimated to take no longer than 30 minutes.

At 1542 hours the assault began, and immediately things began to go wrong. The Little Bird helicopters that put the Delta operators on the ground kicked up so much dust that one of them was forced to go around and land out of position.

The Rangers were supposed to fast rope on all four corners of the target building, but Chalk Four was put down a block north of the target and was attempting to move on foot to the target when heavy ground fire prevented their linkup.

One of the Rangers from Chalk Four, PFC Todd Blackburn fell off the rope and suffered serious back and neck injuries and required immediate evacuation. Three Humvees were assigned to the task and en route back to the base came under heavy fire. SGT Dominick Pilla was killed instantly with a bullet wound to the head.

First Black Hawk Shot Down: At approximately 16:20, Black Hawk callsign Super 61 piloted by CW3 Cliff “Elvis” Wolcott and CW3 Donovan Briley, was shot down by an RPG. Both pilots were killed instantly in the crash and two of the crew chiefs were severely wounded. SSG Daniel Busch and SSG Jim Smith, both Delta snipers, survived and set up a defense around the downed bird.

A Little Bird, callsign Star 41 and piloted by CW3 Karl Maier and CW5 Keith Jones, landed nearby and Jones left the helicopter and carried Busch to the safety of the helicopter while Maier provided cover fire from the Little Bird’s cockpit, repeatedly denying orders to lift off while his co-pilot was not in the Bird. Star 41 evacuated SSG Busch and SGT Smith, though SSG Busch later died of his injuries, being shot four times while defending the crash site.

A Combat Search and Rescue (CSAR) team in Black Hawk Super 68, led by Air Force Pararescueman TSgt Scott Fales, fast-roped down to Super 61’s crash site and immediately set up a triage for the wounded crew chiefs. Both pilots were dead, the CSAR team moved the wounded to a better defensible point and used the kevlar armor salvaged from Super 61 to protect the wound. Super 68 then suffered an RPG hit that severely damaged the helicopter and they peeled off. Although badly damaged, Super 68 made it safely back to the base.

Confusion reigned as both the ground and assault teams were under the impression that they were waiting for the other to give the call to exfil and 20 valuable minutes were lost. That’s when all hell broke loose.

Super 64 Shot Down, Gordon and Shughart Defend the Crash Site: It was during this time at 1640 hrs when Black Hawk Super 64 piloted by CW3 Mike Durant was hit by an RPG and crashed. Durant was the only survivor. Operating overhead in Black Hawk Super 62 were Delta snipers SFC Gary Gordon and SFC Randy Shughart who twice requested to be put down on the Super 64 crash site and were refused. On the third request, they put down and secured Durant and moved him to the edge of a building. 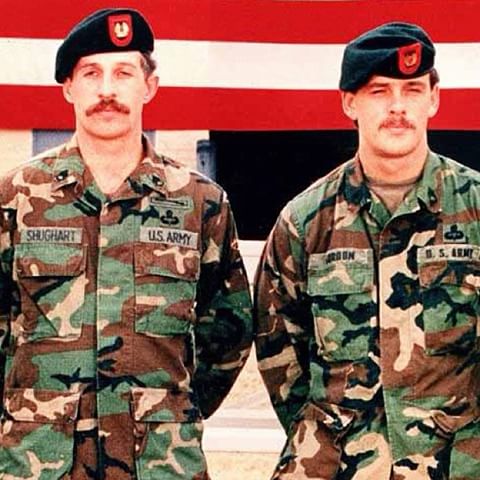 Super 62 stayed overhead providing fire support until they too were hit by an RPG. The Black Hawk was forced to return to the base. The two Delta snipers were alone.

During this time a force of about 90 Delta operators and Rangers reached the first crash site. Taking murderous fire, they were pinned down in the building around the crash site and were unable to move. During the movement to the site, Delta operator SFC Earl Fillmore was killed. One of the Rangers, CPL Jamie Smith was killed soon after arriving to the crash site in the firefight with Aidid’s militia.

Gordon and Shughart kept a large mob of militia at bay inflicting heavy casualties on them. But there were too many and they soon engulfed. Gordon was killed by enemy fire. Shughart crawled back to Durant and gave him Gordon’s rifle. He then went to the front of the helicopter and held off the mob for another 10 minutes. Then out of ammunition he too was killed. Durant was beaten badly but survived and taken prisoner. Both Gordon and Shughart would be awarded the Medal of Honor for their actions on that day.

The convoy under McKnight was being directed by LTC Harrell who was in the air to the crash site, but the roadblocks set up by the Somali citizens and militia in addition to the heavy fire were keeping the Humvees from finding the location. Increasingly lost in the maze of narrow streets and not getting the timely directions from above were taking a toll. McKnight’s crew became known as the Lost Convoy. If they had any kind of armored vehicles, the roadblocks could have easily been swept aside.

They reached the embattled troops around 0200 on October 4th. Two men of the 10th Mountain would be killed during the relief convoy operation as well as two Malaysian soldiers and a Pakistani.

When the vehicles were loaded at the Super 61 site, there wasn’t room for all of the men to ride. There a mixture of Delta operators and Rangers began what was characterized as the Mogadishu Mile. They had to exfil on foot. One soldier was hit by gunfire but survived. All of the troops reached the UN base by 0630 on October 4.

On October 6, a Delta operator, SFC Matt Rierson was killed by a stray mortar shell that landed on the base.

Aftermath: The US suffered 19 killed and 73 wounded during the battle. Somali casualties differ widely depending on the source but were anywhere between 350-1000 dead and another 1000+ wounded. Durant was released 11 days later. The Somalis would drag the dead of Super 64’s crew as well as Gordon and Shughart thru the streets of Mogadishu for the next several days. Eventually, their bodies were recovered.

Footnote: General Garrison accepted full responsibility for the mission and ended his career as the Commander of the USAJFKSWC. He retired on August 1, 1996. As this ceremony was about to commence, a large number of Delta operators in civilian clothes came, many of those who were there in Mogadishu, to give the General a nice sendoff.

They informed him that Aidid had been killed earlier that day. There were big smiles and high fives all around…