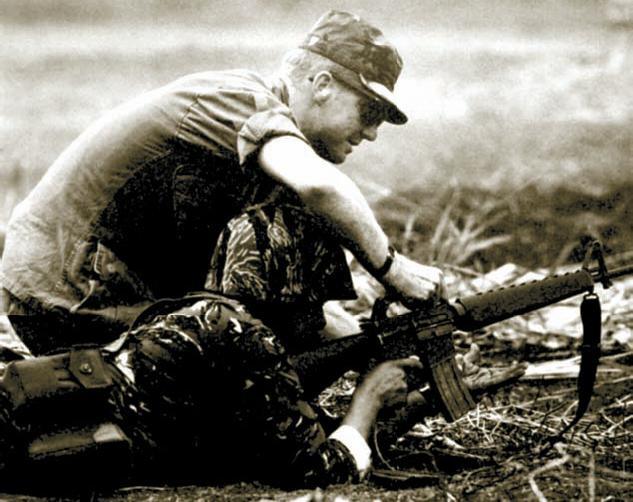 Thirty years ago today on March 31, 1987, Special Forces SSG Greg Fronius was killed in action in El Paraiso, El Salvador when guerrilla forces from the FMLN (Farabundo Marti National Liberation Front) attacked the Salvadoran base during an early morning attack.

Fronius was 27 at the time of his death and left behind a wife and two small children. He was one of the only 55 military advisers to the Salvadoran military allowed at that time and was assigned to the cuartel, which was the headquarters for the 4th Brigade.

His death during the brutal war that wracked El Salvador took place in a little-known time when many Special Forces risked their lives there during a so-called time of peace. It was a period that wasn’t recognized as a war zone for the Green Berets until many years later.

Fronius graduated from the Special Forces Qualification Course (SFQC) as an Engineer Sergeant (18C) and was assigned to the 2nd Bn, 7th SFG(A) from 1983-85. In 1985, he was reassigned to 3/7 SFG in Panama. There, in early 1987 he was sent to El Salvador as Intelligence Sergeant assigned to the Military Advisory Group.

The 4th Brigade Headquarters in El Paraiso, 36 miles north of the capital of San Salvador had two American advisors assigned but at the time of the attack, Fronius was alone, his counterpart was in the capital getting some equipment and was scheduled to fly out in a helicopter the next day.

The guerrillas launched a coordinated assault beginning at 2 a.m. on the morning of March 31. They had concentrated mortar and rocket fire that targeted the major headquarters buildings. It was later learned that they were helped by DIA agent and double agent spy Ana Montes. Montes was considered an up and coming agent for DIA but in reality, she had defected and was spying for Cuba.

She visited the El Paraiso base just weeks before the attack and debriefed the Americans there, and later fed the information directly to her Cuban handlers who passed it on to the FMLN. She was directly implicated in Fronius’ death. She was not caught until her arrest in September 2001 just after the attacks of 9/11. She was sentenced to 25 years in prison in 2002.

The base at El Paraiso held 1000 troops but at the time of the attack on March 31, only 250 were on site. The remainder were out on different operations. It was during the attack where Montes treachery paid off for the FMLN. Their mortar and rocket fire was extremely accurate, nearly all of the headquarters buildings were either destroyed or severely damaged.

Casualties were high, 69 El Salvadoran soldiers were killed, another 79 were wounded. FMLN casualties were probably even higher. Once the attack commenced, Fronius was in the command bunker under the HQ building and he sprinted up the stairs to reach an M-60 machine gun position that was engaging FMLN troops that were inside the compound. With complete disregard for his own safety, he took off, going up the steps, when a rocket or mortar shell perforated the corrugated tin roofing of the stairs and the explosion killed Fronius.

He was posthumously awarded the Silver Star and promoted to Sergeant First Class (E-7) The language lab at Ft. Bragg was named in honor of him in 1997.

He was later buried in a small cemetery in Western Pennsylvania. It was a bad week for the Green Berets of the 7th SFG. The firing party for his funeral was from ODA-722 1st Bn. They had just come from New York and had buried their A-team Commander CPT Schlomer who had been killed in Honduras earlier.

Special Forces SFC Tommy Grace was badly burned in the crash but survived.

During the height of the El Salvadoran Civil War between 1983 – 1992 a total of 21 Army, Navy and Marines lost their lives in our covert operation to stop the Marxist guerillas from wresting control of the country.

Much about that time frame was shrouded in secrecy but the veil was finally lifted in 1997 as the combat operations the SF advisors were involved in was recognized. An interesting footnote and tremendous read was a pitched battle in San Miguel, El Salvador which took place in 1984. That can be read in its entirety here.