The planning for this raid would have begun months ago, most likely involving signal intelligence, a fancy word for tracking the target’s use of cell phones by him or known associates.  From there the noose would tighten in terms of his exact location.  Once that was worked out to a reasonable approximation, assets on the ground would then do the leg work of surveilling the location to assure the target was present there.

The intelligence gathered would include knowing how many persons lived there, their comings and goings and who visited the compound and where they went afterward.   Photos and video from every angle would be taken and operatives would even go as far as walking past the building or attempting some ruse to gain entry to determine the layout, like a city worker checking for a gas leak or other inspection of some kind.

ISIS leaders know the U.S. is looking for them so they go to great lengths to keep their locations concealed, like bin Laden did, they often take up residence in plain sight hoping to blend in with the local population.  Theirs is an existence not unlike being in a prison of their own making, living in near-complete isolation from the outside world.  Al-Qurayshi was said to never leave the inside of his residence on the third floor except to bathe.

From there, a model would be built of the compound including the surrounding buildings in several scales to plan the method of approach and assault.  A realistic mockup in full size would also be made to allow the operators to practice assaulting the building over and over until they know its layout is cold.

Current reports state the attack began at approximately 0100hrs with the arrival of some 50 helicopters(We don’t believe this number is accurate at all, there aren’t that many in the theater) from a base said to be in the region.  Since the location of the village is only about 20 minutes from the border with Turkey and the administration stated that it deconflicted with several nations before the raid we imagine the raid may have begun from Turkey, or U.S. forces egressed to Turkey after the raid or perhaps both.

Before the raid witnesses claim to have heard a loudspeaker telling inhabitants of the target house to evacuate any women or children and surrender.  Witnesses stated that a family exited from the ground floor. Upon landing the raiding force engaged in what was said to be an hours-long gun battle with those inside the second and third stories and with members of a militant group that heard the battle and tried to intervene in some manner with two of them being killed.

The DoD claims that during the fight, Al-Qurayshi detonated an explosive vest or belt inside the third story killing himself and his wife and two children. Photos taken by a photographer for Getty of the building itself seem to support these claims as the debris is blown outward, the lower floors are not collapsed and there is an apparent lack of fire damage that would accompany a strike by a missile or bomb from an aircraft.

During the raid, one of the helicopters suffered a mechanical malfunction and was diverted to a landing area safely. It was destroyed on the ground by the raiding force.  Pictures of the destroyed aircraft identify it as a UH-60 Blackhawk in common use and not the kind of special helicopter used in the Bin Laden raid in Pakistan.

Generally, raids like these do not last two to three hours, but the downed helicopter would have added to this time. 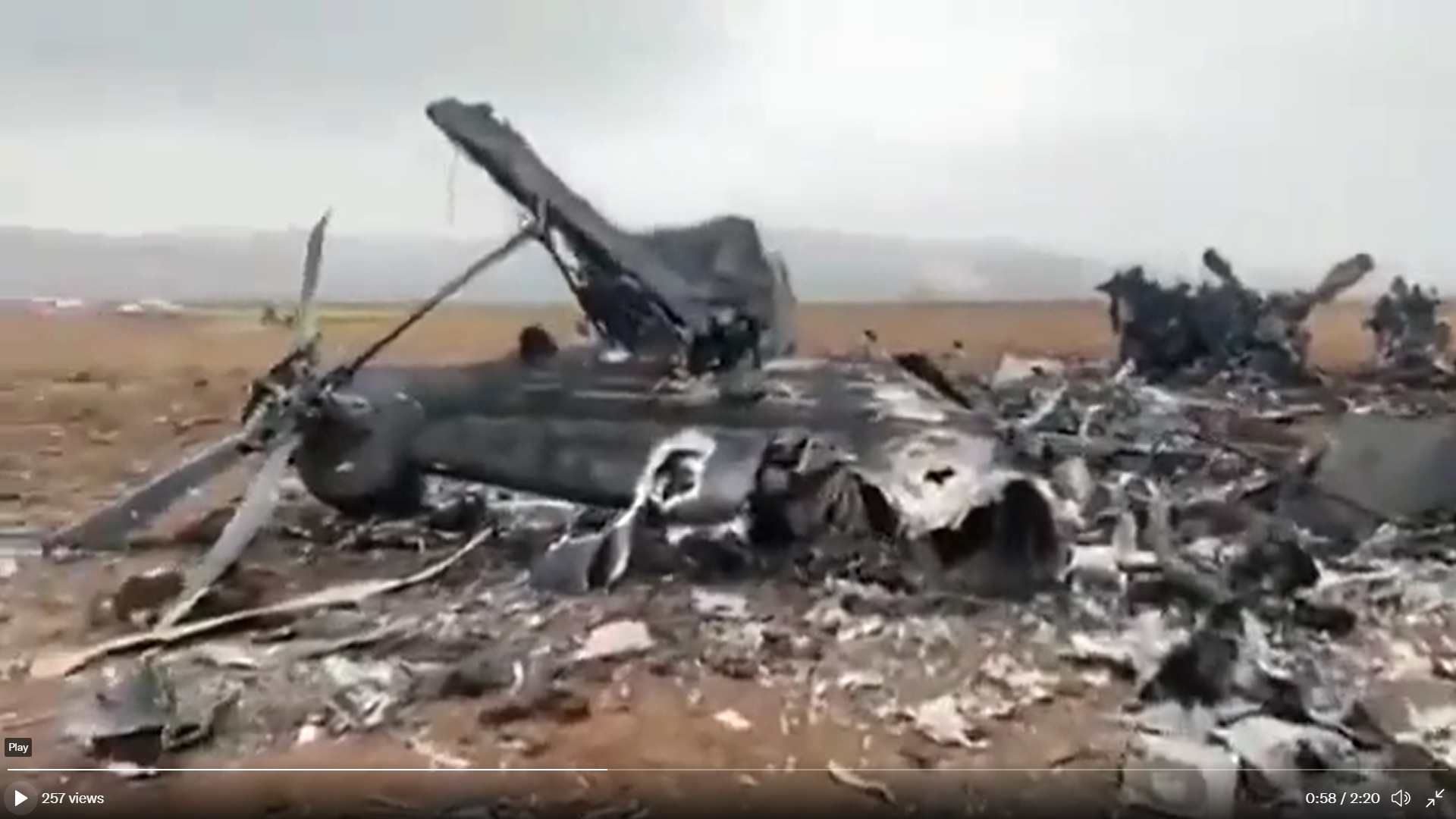 About 150 yards from the main house was a garage building that was hosed down with a heavy weapon of 30mm caliber by our estimation.  This suggests the presence of at least one Apache attack helicopter.  This building may have contained vehicles that the targets might have used to escape in. They appear to have entered the aluminum rolling doors of the building at a flat angle which points away from them being fired by an Ac-130H gunship orbiting over the raiding force. We looked at Flight Tracker and found what appears to be the air support for the raid. We believe the tracks show a least one drone in orbit over the area and perhaps four F-16s flying close air support for the mission.  They are stacked between 20,000 and 22,000 feet. Speculation abounds over which Special Operations Unit conducted the raid or whether it was done by an elite unit belonging to a foreign country like Iraq’s CTF or the Jordanians.  We believe that if any coalition forces had been part of the raid President Biden would have given them due credit in his announcement.  SEAL Team Six is unlikely because they generally operated in Afghanistan while CAG or Delta Force has Syria as their bowl of falafel when it comes to special operations directed at high-value targets. Given the location of the raid and a few other markers, we estimate that CAG or Delta Force conducted this very successful raid.

The fact that this raid occurred in a country wracked by civil war with various Islamist militant groups all vying for control and the urban environment that the raid took place in, killing the target without any fatalities reflects very highly on the people who planned and executed the mission.