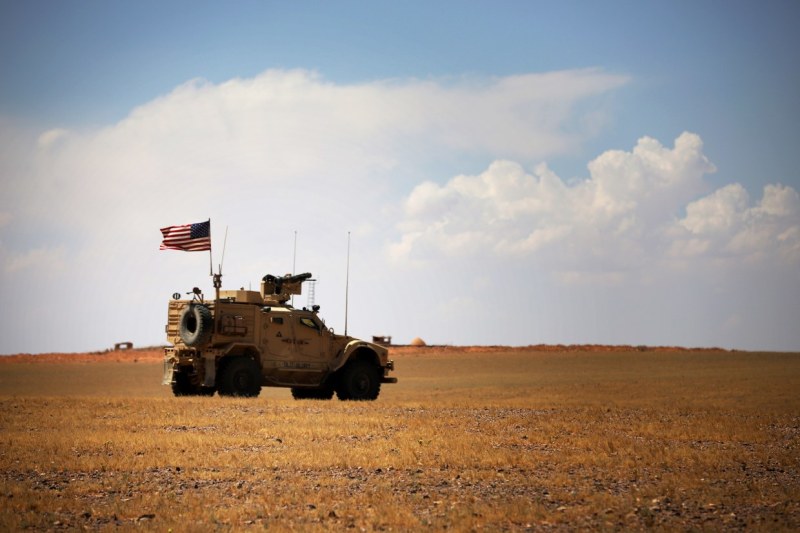 The U.S. military intercepted and shot down a small drone that was believed to be threatening a U.S. base in southern Syria Tuesday, just weeks after the same base was attacked by drones and rocket fire. It is believed to have been launched by Iranian proxy militias in the region.

Capt. Bill Urban, the spokesman for U.S. Central Command, said that two drones or unmanned aerial systems (UAS) were tracked entering the airspace around Al-Tanf Garrison on Tuesday evening. “As one of the UAS continued its course deeper into the Al-Tanf Deconfliction Zone, it was assessed as demonstrating hostile intent and was shot down,” Urban said.

The drone was taken down by an air-to-air defense system. The second small drone turned and left the area. No casualties or damage to the facilities were reported.

The al-Tanf base is in a strategic area near the Iraqi and Jordanian borders that includes the strategic M2 highway that enables Iranian-backed militias to travel all the way from Tehran to southern Lebanon. The U.S. troops at the base train Syrian Democratic Forces (SDF) to fight against ISIS fighters in the region.

Now the question remains, will the U.S. respond to this latest threat to U.S. troops and facilities in the region, or will there be more of the threats of retaliation with little action taken?

This is the second attack in weeks at al-Tanf. In an October 20 attack, five so-called “suicide drones” attacked the base, followed by rocket fire that damaged facilities at the base but resulted in no casualties among the U.S. troops. Thanks to a timely warning by Israeli intelligence, American troops were able to take cover, a big reason why there were no casualties.

In that attack, the five drones crashed into the base. However, only two of the drones carrying a mixture of high explosives, shrapnel, and ball bearings exploded. The other three drones were examined and identified as being made in Iran. There was no doubt regardless of who was behind the attack when Iran proclaimed the attack as “a major success” and threatened more attacks would follow.

The Iranian government denied any involvement, claiming that there was no proof of Iranian involvement. However, a site run by Iran’s Islamic Revolutionary Guards Corps (IRGC) said the strike was a response to the U.S. allowing Israeli attacks on “resistance” forces in eastern Syria. Militia commanders, it said, concluded that they “must pull the teeth of the snake.”

American officials were reluctant to disclose further details of the attack. The Pentagon carefully worded the report as to not specifically accuse Iran, which may be due in part to politics. Direct accusations against Iran could derail talks to restart The Joint Comprehensive Plan of Action (JCPOA) nuclear deal with Iran, which the Biden administration has made a priority.

After the October 20 attack, Captain Urban characterized it as “coordinated and deliberate” and threatened that the U.S. would respond “at a time and place of our choosing.” Now, nearly two months later, more threatening actions have occurred, and U.S. lives were at risk.

American officials told the New York Times a month ago that Iran attacked al-Tanf as a result of Israeli missile attacks on weapons warehouses in Syria but was reluctant to attack Israel for fear of retaliation. So, they did the next best thing —  conduct a drone and rocket strike against the Americans. That is the part of the situation that Washington needs to examine much more closely.

The Iranian proxy militias, now calling themselves the “Allies of Syria,” were reluctant to respond to Israel directly. They knew that the Israeli response would come quickly and be massive. That is what deterrence is all about. So they attacked an American base. Why? Because they didn’t fear any retaliation because the current administration is dead set on getting the JCPOA reinstated, even though Iran has long since exceeded the nuclear limits set by the agreement.

That isn’t deterrence but shows what adversaries perceive as weakness. And that perceived weakness can result in more attacks on U.S. bases and personnel. Washington ignored the October 20 attack to entice Iran back to the negotiating table. This latest air incursion on al-Tanf will only embolden our adversaries further.

After the chaotic and horribly conducted withdrawal from Afghanistan, the U.S. resolve has been called into question. And this is just another test of the American resolve or lack of it.