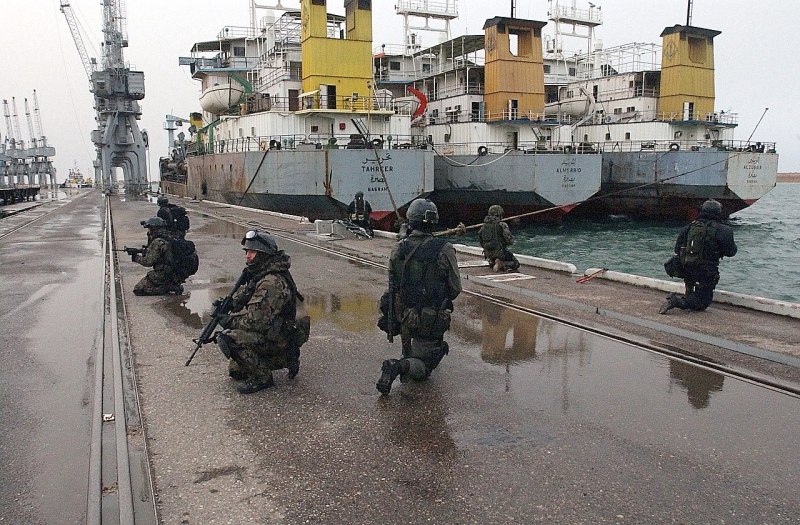 GROM, which also means “thunder” in Polish, traces its lineage to the exiled Polish paratroopers of World War II known as the Silent Unseen (Cichociemni Spadochroniarze Armii Krajowej). The Silent Unseen was a special operations unit of 315 men — and one woman — trained in Great Britain before inserting into occupied Poland to oppose the Germans.

GROM is modeled after the Tier 1 units of NATO, such as the U.S. Army’s 1st SFOD-D (Delta Force), the US Navy’s SEAL Team Six (DEVGRU), and the British Army’s SAS.

During the transition from Communism to democracy in 1989, the Soviet Union allowed many Russian Jews to emigrate to Israel. Poland was one of the few countries that provided aid, in the form of logistics for the operation, later dubbed Operation Bridge (Operacja Most).

However, because of this, Poland earned the ire of many countries in the Middle East. In Lebanon, two Polish diplomats were shot by the terrorist group Hezbollah. The Polish government dispatched the larger-than-life soldier Lieutenant Colonel Sławomir Petelicki to Lebanon to secure the safe passage of civilians and Polish diplomats.

Upon returning to Poland, Petelicki presented a plan for the creation of a special operations unit that was to be assigned to the Ministry of Interior. Petelicki’s concept was approved and on June 13, 1990, GROM was formally established as JW 2305.

LTC Petelicki was chosen as the first commander of GROM. A professional holdover from the Communist regime, Petelicki set about establishing a professional, highly-trained organization. The first candidates for GROM all came from already-existing special units within the Polish Armed Forces.

The selection and assessment process was grueling. Few men were able to meet their standards.

A Polish website about GROM offers a glimpse inside of what the unit is looking for in its candidates.

“Special units, unlike general military units, require an appropriate selection of people, which in GROM is guided by selection. It cannot be limited to a physical test of the organism’s efficiency – says Col. Roman Polko, GROM commander. – Candidates should be intelligent (higher education recommended), professional in various fields. In the most stressful situations, they need to stay sober and analytical, and even cheerful. In addition, special units require different training, functioning, and management, a specific structure of subunits, and specialized equipment. Otherwise, there is no point in bothering to form and maintain them.”

The initial physical fitness test to get into GROM selection include:

Fitness tests and psychological tests usually last up to 24 hours.

Many of the initial GROM candidates were trained by the U.S. Army Special Forces (Green Berets). The unit also received funding from the CIA.

In 2013, SOFREP’s Brandon Webb was invited to Poland and got a first-hand peek into GROM and filmed an Episode of the SpecOps Channel on the unit. You can watch the episode here.

GROM During the Global War on Terror

GROM deployed a 40-man well-trained unit in Afghanistan and Iraq as part of the U.S.-led coalition.

In the invasion of Iraq, GROM was part of the Naval Special Operations Task Group, along with U.S. Navy SEALs, British Royal Marines, and attached U.S. PsyOps and civil affairs teams.

In the Afghanistan War, GROM operators were tasked for a time as bodyguards for VIPs.

However, that duty was not a highlight for the unit. “Never send a Ferrari to dig coal,” quipped one GROM veteran, as highlighted in John Pomfret’s upcoming book From Warsaw, With Love which will be released later this month.

In late March 2003, GROM operators assaulted the KAAOT Oil Terminals, while U.S. Marines and Navy SEALs from SEAL Team Eight and 10 seized the MABOT oil terminal. Both of the terminals were seized with no casualties, while the teams found explosives that were defused by GROM and SEAL operators.

After the initial phase of the operation, GROM operators were assigned to form the core of Task Unit Thunder, as an element of CJSOTF-AP (Combined Joint Special Operations Task Force-Arabian Peninsula), providing a Tier-1 counterterrorism unit for the task force.

American operators have great respect for their Polish counterparts. Poles mingled with Americans on missions, and as referenced in Pomfret’s book, one couldn’t tell the difference between a Polish or an American operator unless they would hear them speak.

GROM is organized along the following lines:

The logistic and security unit is located in Warsaw.

GROM operators use a variety of weapons depending upon the mission. But the most common weapons found in the unit include: