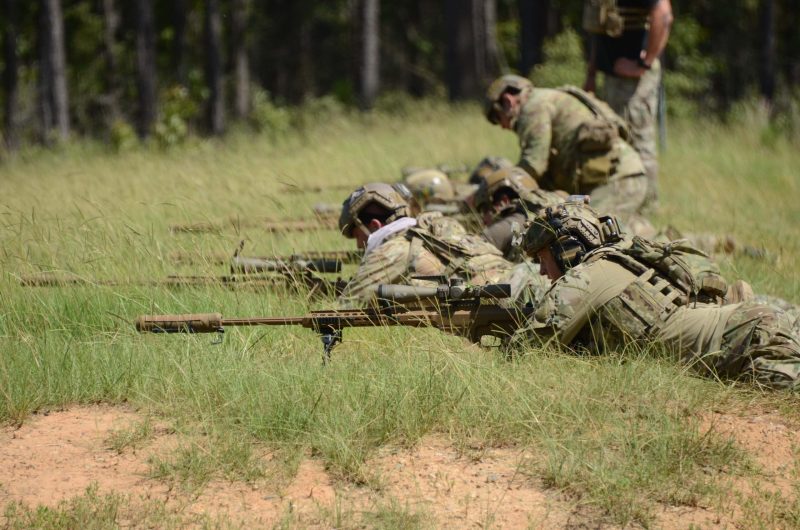 The Army is testing its newest sniper rifle, the MK-22, Modular Precision Sniper Rifle (PSR), manufactured by Barrett Arms, at Fort Bragg, NC according to a press release from the Army.

This operational testing by snipers from the 82nd Airborne and the Special Operations Command is the final hurdle before the weapons are fielded to the forces in the field. The MK-22 will replace the Army’s existing M107 sniper rifle and the M2010 Enhanced Sniper Rifle as well as all of the bolt-action sniper systems used by the Marine Corps.

The Special Operations Command opted to go with the MK-22 back in 2019. The regular Army and Marines soon followed suit.

The testing will include carrying the MK-22 in airborne parachute jumps via static line. Special operations troops will also simulate high-altitude, low opening (HALO) jumps in a wind tunnel, followed by HALO jumps in nearby Laurinburg, NC. The gun will be carried both as a side- and front-mounted configuration for the jumper.

The MK-22 features a folding stock and removable suppression system. It has the ability to change between three different calibers by quickly changing barrels without requiring an armorer. Instead, a sniper will be able to swiftly and easily change calibers in the field by using a single tool. The weapon is chambered for .338 Norma Magnum, .300 Norma Magnum, and 7.62 x51mm NATO.

“The modular nature of the PSR allows it to be tailored to meet mission requirements and is appealing to airborne Snipers who are typically armed with long-barreled precision rifles of a single caliber offering,” said SFC Marcus Love, Airborne and Special Operations Test Directorate, Test Noncommissioned Officer.

Snipers from the 82nd Airborne and the Special Operations Command at Ft. Bragg took part in the familiarization with the system, maintenance, target engagement, system configuration, and zeroing procedures according to the Army’s press release.

Afterward, they tested the weapon during airborne operations. They specifically tested whether the snipers’ pre-mission zero was not degraded by the shock of landing or the parachute deploying.

“Testers can monitor any shift in the weapon sight reticle that may have been induced by shock associated with static line parachutes,” said Miles Crawford, Test Technology Branch Chief, ABNSOTD.