Operation Valkyrie was the plan by German Count Claus von Stauffenberg and other senior German generals in the Wehrmacht to assassinate Adolf Hitler and several other high ranking Nazis in an attempt to end the war in Europe. It failed.

Stauffenberg planted a bomb concealed in a briefcase under the conference table in Hitler’s Wolf’s Lair, his headquarters in East Prussia, but another German officer unknowingly moved the briefcase to a spot farther down the table behind a heavy wooden leg where the blast of the explosive was directed outwardly.

Hitler survived with very minor injuries. Four Nazi officers were killed in the blast, 13 others were injured, 3 seriously. The conspirators, believing Hitler dead had already moved to wrest control of the government from the Nazis and with the news that Hitler survived it quickly collapsed. Conspirators were arrested, tried in a kangaroo Nazi court and quickly executed. The war would drag on for many more months at the cost of hundreds of thousands of lives.

Prelude to a Coup: By July of 1944, the war in Europe had turned against the Germans. In the east, the sheer weight of the Soviet Union’s endless supplies of troops, tanks, and planes had pushed the Germans back into Poland.

In the west, the Allies had crossed the English Channel on D-Day, gained a foothold in France and were pouring troops and supplies into the continent. They were close to breaking out of their Normandy beachhead and sprinting across Western Europe.

The Allied air forces ruled the skies, especially over the battlefields in France. Allied fighter-bombers were taking a terrible toll on German armor and their supply lines. German cities and their industrial might were beginning to suffer under the non-stop bombing by the Americans during the day and the British at night.

With the situation looking bleak for the German people, growing tired after five years of war and millions of casualties, a group of German Army (Wehrmacht) officers planned on using “Operation Valkyrie” which was a German World War II emergency government operations plan issued to the Reserve Army of Germany to execute and implement in case of a general breakdown in civil order of the nation.

The plan of these officers was to assassinate Hitler, disarm and arrest the SS which would free all the German soldiers from their oath to Hitler once he was dead. General Friedrich Olbricht, Major General Henning von Tresckow, and Colonel Claus von Stauffenberg planned on modifying it on July 20. 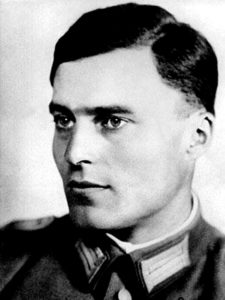 Their plan involved tricking the Reserve Army into the removal of the Nazi government with the story that the SS had attempted a coup d’état and assassinated Hitler. The conspirators counted on the soldiers’ obedience to their orders from the Reserve Army High Command.

Colonel General Friedrich Fromm, as commander of the Reserve Army, could activate Operation Valkyrie. Only he and Hitler had the power to do so. Therefore, for the coup to succeed, therefore, Fromm had to be convinced to go along with the conspiracy or be removed from the equation.

Stauffenberg as Chief of Staff to the Reserve Army would attend briefings with Hitler at his Wolf’s Lair HQs. He planned on executing the assassination and then race back to Berlin to execute Valkyrie. The conspirators had already contacted the Allies thru Allen Dulles the OSS (later CIA Director) Chief of Station in Switzerland.

Between 1943 and 1944, five attempts to assassinate Hitler were put into motion and none of them ever got implemented. As the war progressed, Hitler was seen less and less in public and even shunned Berlin for the most part. He spent most of the later years of the war either at Wolf’s Lair in Rastenburg with an occasional visit to his Alpine retreat in Berchtesgaden in Bavaria. He was heavily guarded by the SS and Gestapo in both places because the Nazis feared an assassination attempt.

July 20 Attempt: On that fateful day, von Stauffenberg flew to Wolf’s Lair for the conference. He went into the men’s room to prime the bomb, he could only prime one as a result of war wounds, he lost an eye, his left hand and two fingers on his right.

He gave the other bomb to his aide, rather than leaving it in the briefcase where it was sure to explode anyway. The bomb consisted of a two-pound block of plastic explosive that was primed with a pencil detonator. He crushed the cap end which consisted of a thin copper tube containing copper chloride that would take about ten minutes to silently eat through wire holding back the firing pin from the percussion cap.

At 12:30 Stauffenberg entered the conference room and placed the bomb under the conference table next to Hitler. After just a few moments, he was paged out of the room for a phone call, which was the plan. Colonel Heinz Brandt saved Hitler’s life inadvertently by pushing the briefcase with his foot behind a thick wooden leg of the table. It directed the blast away from Hitler. It would direct the blast closer to himself, however, as his leg was blown off during the explosion which took place at 12:42.

Stauffenberg, believing Hitler dead, raced with his aide and driver and bluffed their way thru three checkpoints. His aide, Werner von Haeften, then tossed the second bomb into the woods on the road to the airport. They had an He-111 bomber standing by at the airfield and by 1300 they were airborne back to Berlin.

By 1600 Stauffenberg reached Berlin, he telephoned the other conspirators saying Hitler was dead. The order was given to initiate Operation Valkyrie. But a phone call from General Erich Fellgiebel, also a conspirator to the Reserve Army HQs stated that Hitler was alive. The troops didn’t know who to believe and that froze them with indecision.

Fromm, who had been sitting on the fence, called the Wolf’s Lair and spoke with Field Marshal Keitel who demanded to know where von Stauffenberg was. Fromm turned his back on the resistance and switched sides. He said he thought Stauffenberg was with Hitler.

Fromm attempted to have Stauffenberg arrested when he arrived at the Bendlerblock HQs. Olbricht and Stauffenberg then detained Fromm at gunpoint. In other places in Germany and occupied France, the army officers who were part of the plot were going thru with the plan as they’d been instructed.

But it was quickly falling apart. Himmler, who had contact with several conspirators, playing both sides against the middle, moved to consolidate Nazi power. At 1800 hours the conspirators in Berlin were still sitting on their hands as several key officers were wracked by indecision.

At 1900, Hitler called Major Remmer in charge of the Berlin garrison to assure him that he was still alive. Remmer’s orders were to surround the Bendlerblock HQs but not to enter. The conspirators panicked and many were attempting to switch sides. Stauffenberg was wounded in the gunfire. Fromm regained control of the HQs and convened a hasty court-martial for Stauffenberg, Olbricht, Haeften, and Albrecht Mertz von Quirnheim. He sentenced them to death and hastily shot them in the courtyard just after midnight to cover his own tracks.

Otto Skorzeny appeared and with Remmer they took charge of the situation and under orders from Hitler stopped all summary executions to allow the Gestapo to interrogate the rest of the conspirators.

Over 7000 German citizens were arrested. Of those, nearly 5000 were executed. Those arrested were put on trial in a kangaroo court run by fanatical Nazi judge Roland Freisler who would shout and browbeat the accused for the newsreels who filmed it all. The accused were stripped of their uniforms and given old, shabby clothing that didn’t fit. All of the accused were found guilty and were sentenced to hang with the punishment being carried out within two hours of sentencing. Included in the killing was Fromm who was found out anyway and executed in March of 1945 by a firing squad.

The failure of the 20 July 1944 bomb plot meant that the war would continue for another 9 months with hundreds of thousands of casualties. The last of conspirators, Ewald-Heinrich von Kleist-Schmenzin died in 2013 in Munich. The conspirators, long dismissed as disloyal Germans were finally thought of as heroes.