The Claymore is perhaps the most famous mine of the latter half of the 20th century.  Making a name for itself during the Vietnam War, it was used to great effect by US forces to repel assaults and initiate ambushes. Over the years, allies and enemies took notice, and it has spawned many copies while remaining a highly effective instrument for literally shredding the opposition.

Unlike traditional land mines, which direct their explosive upward, the Claymore is what is called a “directional mine.” This means that the user points the mine by using a crude sight on top, and steadies it with twin scissor-like anchors which can be pressed into the ground, or stand free on their own. A wire is then unfurled a safe distance back to the user’s position were a detonator in the form of a clacker is squeezed to initiate the explosion.

Since the Claymore has a curved rectangular shape, once fired, plastic explosive hurls 700 steel balls out in a 60° radius. Anything exposed within a 50 yard distance is bound to become a casualty. This only increases by magnitude the closer to the detonation. The function is rather like dozens of shotguns going off at once. There is nothing like it on the battlefield. 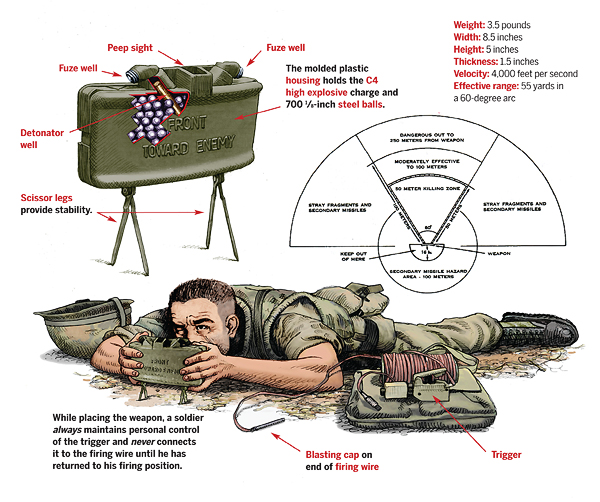 The physical appearance of the Claymore is known throughout the world. Besides its physical shape, it is constructed of green plastic and has the famous words “FRONT TOWARD ENEMY” in raised letters, warning the user which direction to point the business end. This assures mistakes in this manner are nonexistent and that the mine will live up to its name, which comes after the Scottish Claymore sword which cut swathes through its enemies.

Before the Claymore arrived, though, a certain concept needed discovery. This began in World War II, when a Hungarian and German scientist revealed that an explosive with a heavy backing surface, like a steel plate, could direct most of its energy forward with significantly less danger behind it.  They named the discovery after themselves, the Misznay-Schardin effect, and spent the remainder of the war trying to perfect it by creating different mines, such as antitank and trench versions, which demonstrated that the effect had promise. However, none ended up in use because the war came to an end, so the theory was shelved.

That ended with the Korean War, when the Chinese launched massive human wave attacks that sometimes overran Allied positions. Conventional minefields helped, but planting them took too long and units desired something just as effective and quick. Afterward, in the United States and Canada, designs for an answer began to take shape.

Canada was the first to try the Misznay-Schardin effect with a large mine backed by Composition B that propelled steel cubes. Known as the ‘Phoenix’, it proved problematic and impractical due to its size. At nearly the same time, a similar design much smaller in size was developed in the U.S. At last, a workable directional mine had arrived.

It remains unknown if he used the Phoenix for inspiration, or it was an original idea that he had. Regardless, Norman Macleod, head of the Explosive Research Corporation, came up with a winner. He created a small curved, or convex, mine called the T-48, and tested it for the U.S. Military. The tests confirmed the mine’s lethality, and it was quickly accepted into service as the M18 Claymore.

10,000 of these saw issue until 1954, when officials felt improvements could be made in several areas. Picatinney Arsenal then issued the request to improve the M18, which were as follows:

Designers worked to meet the requirement and produced the M18A1. It corrected all of the M18’s flaws, doubled the effective range, and fixed the reliability issues to set the standard for future directional mines. To confirm this, hundreds of thousands shipped off to a place where it was vitally needed – Vietnam. There, it not only proved useful, but a war winner personified.

Positioned on base perimeters, countless NVA and Viet Cong attacks were annihilated as they tried to storm the wire. In many cases, this was all that stood between surviving and being overrun, leaving Many a U.S. or South Vietnamese soldier owing owe their lives to the Claymore. In the jungle, Claymores found use starting or ending ambushes and were carried extensively by Special Forces, who deployed many in a circle to guard their position as they slept. Not only were they planted on the ground, but frequently in lower branches of trees to improve the vertical spread of the explosion. Uses for the Claymore just seemed limited by a soldier’s imagination when it came to how and where to employ it. Then as today, almost all soldiers preferred and still use the remote control, or clacker. Tripwires and timers are available, usually exclusive with Special Forces, and are seldom used. Remote control provides a safety element of decision by a human mind.

The M18A1 Claymore will continue in production and remain widely deployed, just like its newer copycats the Russian MON-50 and Serbian MRUD.  More recently, there is an even smaller variant produced by the U.S. company Arms Tech Ltd., called the Mini-More. This mine is one-third the size and weight of its cousin, and is currently deployed with Special Forces.

With such a record, Claymore will remain a vital part of many arsenals well into the future.
Featured image courtesy of Wikimedia commons