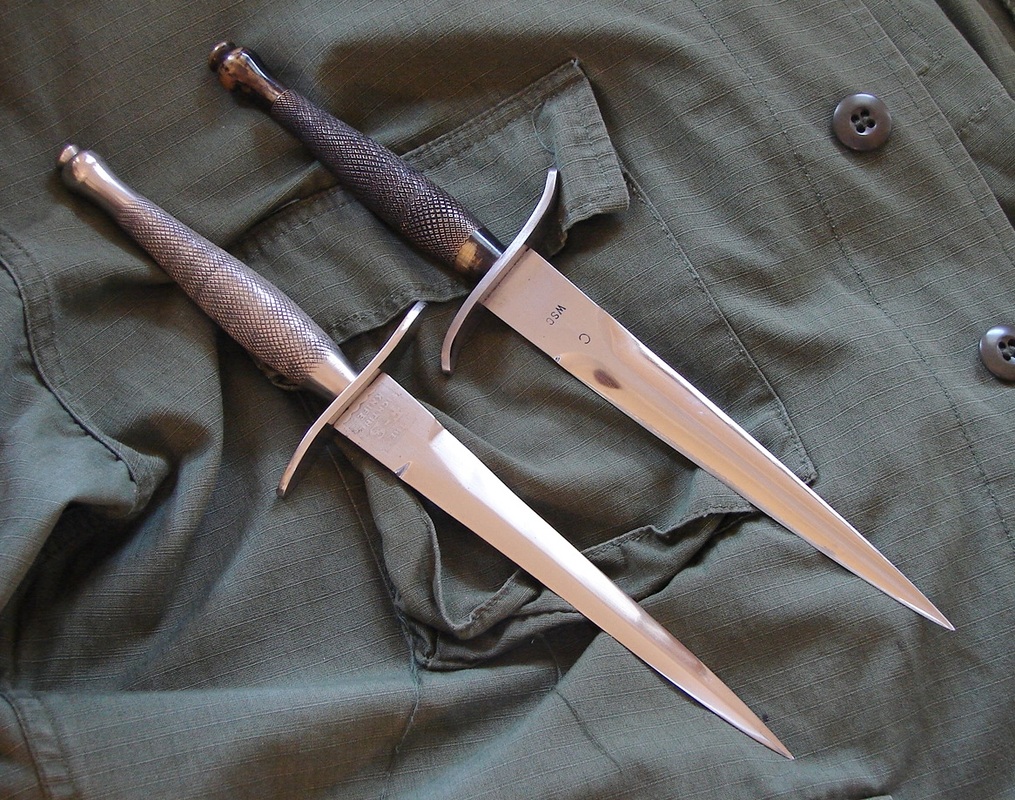 Municipal Policemen William Fairbairn and Eric Sykes had no idea that the knife they designed in pre-war China would go on to be adopted by elite fighting forces, and become world famous. Called the Fairbairn-Sykes Fighting Knife, their design featured a dagger shape with a grip style commonly found in fencing foils, and was purpose built for surprise and attack. In other words: killing people.

However, when initially produced, the knife simply joined a long line of fighting knives then available to the public with little fanfare. That wa,s until World War II started.

The F-S knife quickly found itself being evaluated by the fledgling British commandos and proved exceptional for their purposes, especially when a few modifications were made. The blade length was increased from 5.5 to 6, and then 7 inches, and the grip was resized. These improvements became known as the first, second and third patterns, respectively.

Under contract, Wilkinson Sword Ltd. began production of the Fairbairn-Sykes in early 1941, and the Commandos carried the knife for the next three years, using it in their many raids on the European mainland and forays in the desert. The knife was ideal for silent sentry removal when stabbing the neck or clavicle and, if necessary, the blade could easily penetrate a woolen greatcoat into a man’s ribcage.

Fairbairn commented on the virtues of the knife in a book called Get Tough!, which was published in 1942:

“In close-quarters fighting there is no more deadly weapon than the knife. In choosing a knife there are two important factors to bear in mind: balance and keenness. The hilt should fit easily in your hand, and the blade should not be so heavy that it tends to drag the hilt from your fingers in a loose grip. It is essential that the blade have a sharp stabbing point and good cutting edges, because an artery torn through (as against a clean cut) tends to contract and stop the bleeding. If a main artery is cleanly severed, the wounded man will quickly lose consciousness and die.”

After the U.S. entered the war and established the Office of Strategic Services for covert and guerilla operations, a variant of the knife was requested, but the bid was too low to be fulfilled by the British. Therefore, it was built in Connecticut by Landers, Frary and Clark Company, only to find out that after 20,000 had been made and distributed that the heat treatment was inferior and caused breakages. This led to its replacement in 1944 by the U.S. M3 fighting knife and a sullied reputation among OSS users, many of whom were unaware that it was heat treating and not the design at fault. The American Rangers were luckier, adopting and carrying the British-manufactured piece into battle.

By that time though, apart from the OSS fiasco, the Fairbairn-Sykes knife had become widely distributed among the British, who used it with relish. And not just Commandos but Airborne, Royal Marine, Chindit and Gurkha units, as well. It was a common tool to be found everywhere among forces of the empire throughout both the Pacific and European theaters of operation, right up to the end of the war. For the Fairbairn-Sykes though, it was just the beginning.

The Fairbairn-Sykes Fighting Knife carried on as a weapon of the Cold War over the mountains of Korea, across the deserts of Oman and into the jungles of Malaysia and Vietnam, almost exclusively with the British S.A.S. Along the way it influenced many other designs, namely the popular American Gerber Mark 2. It is still being built today, though it is no longer in issue to Britain. For collectors, finding a genuine issue from WW2 and the early postwar years is still possible. Just be prepared to shell out for the authenticity. If one can be obtained, the owner will not only own a piece of history, in many eyes they will possess the very symbol of Special Forces.