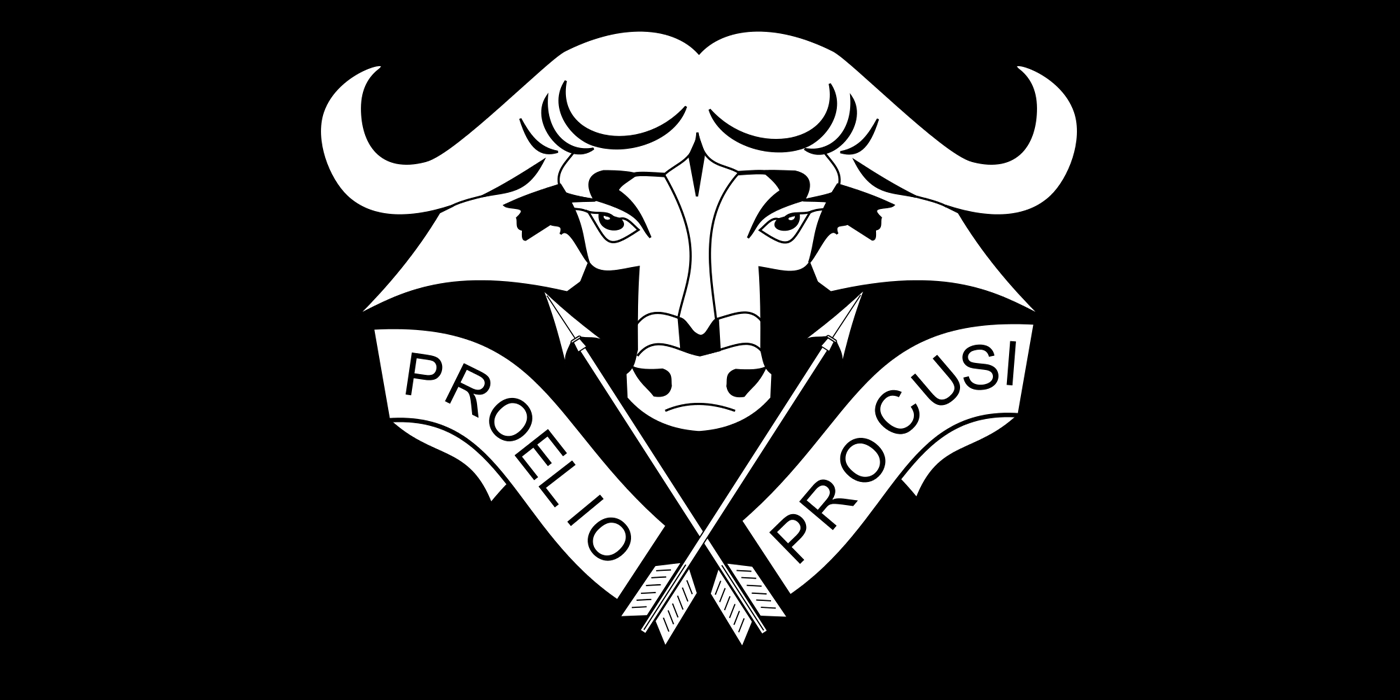 I had followed 32 Battalion’s exploits throughout the 1980s in Soldier of Fortune magazine when they embedded journalists to go on missions and conduct interviews with the fabled unit. I remembered reading about their effectiveness in the field against their primary enemy at the time, which was communist Southwest Africa People’s Organization, or SWAPO, a guerilla unit that found themselves time and again, supremely outclassed by these remarkable men. 32 Battalion battered SWAPO so badly on the plains and in the jungles of what is now Namibia, that SWAPO’s fighting abilities in comparison were little more than an embarrassment. No matter how hard they tried to best ’32’, the end result was always the same: Dead insurgents and their AK-47s placed in piles after an ambush by what would become the most highly decorated, and controversial, unit of apartheid South Africa’s war on communism.

32 Battalion’s origins actually began, not as a recruitment of South African soldiers, but mercenaries from the Angolan Civil War. That war ended in 1975, after the Communists (FAPLA) seized power and the remnants of an opposing force known as the FNLA sought refuge in other nearby countries, with many heading into South Africa in hopes of finding support and continuing the struggle.

That same year, FNLA requests found the sympathetic ear of Colonel Jan Breytenbach of the South African Special Forces Brigade, who asked and received permission to form a unit around the displaced fighters, called Bravo Group. Yet, despite the unit’s foreigners pledging allegiance to South Africa, changing minds up the chain of command almost destroyed the unit before it got off the ground. After much persuading and Breytenbach’s refusal to abandon them, the detachment was allowed to not only exist, but to grow until it contained two rifle companies, a machine gun platoon, a motor platoon, an antitank section and reconnaissance section. In all, this amounted to about 600 men, both black and white filling its ranks.

After meeting this roster, the unit deployed into Southwest Africa and, occasionally, Angola itself as a kind of fire brigade using conventional and unconventional techniques to engage the communist factions, who ultimately desired to bring the anvil of totalitarianism down upon South Africa. These involved FAPLA, their Cuban mentors, as well as the unit which they would decimate almost as a sport in the coming years, the South West Africa People’s Organization (SWAPO). They fought these factions for 15 years and involved many operations, some joint with other forces and some alone, like their most famous mission that occurred in 1980.

With the arrival of the new decade, for many of ’32’s members there remained a great desire to renew efforts in Angola. Still angry that they lost, they did not intend to let the country grow in strength and export its brand of utopia toward South Africa’s border. When a unique military situation presented itself in their former country, they were all too happy to return as part of Operation Tiro A Tiro, a campaign against a major FAPLA base at Savate, 47 miles across the border on the Cubango river.

By this stage of the game, Angola’s communists had caused another significant challenge to their authority, one that resided within the country. It was called UNITA, and was created under the leadership of Doctor Jonas Savimbi. And since its inception, this guerrilla force often operated hand-in-hand with South African Defense Forces to keep the Angolan military busy. So busy in fact, they scored huge victories that put the southern region of the country at risk to come under their control. They needed help to ensure this, and 32 Battalion got the call to wipe out what was left of one of FAPLA’s strongest holdouts

A plan was finalized to go conventional and use two rifle companies (with one being held in reserve) for the main attack and securing of the base, while reconnaissance teams and a mortar platoon would provide cover and operate as a blocking force. As is typical in these types of operations, surprise was crucial, and no air support would be provided.

On May 15, at the Battalion’s forward operating base in Ovamboland, Namibia, the force, consisting of 270 men in total, boarded armored personnel carriers and heavy trucks to head into southern Angola for the drop-off point.

For the next several days, the convoy navigated toward Savate, frequently using reconnaissance units to report changes in troop strength and vehicles at the base. As they got closer, the recon teams used Kayaks to travel both downstream and upstream on the Cubango river to give the latest conditions. Once all the information was gathered, the two rifle companies disembarked from their vehicles three miles away, and attacked the main encampment at approximately 0900 hours on May 21, under the cover of a mortar barrage. The fighting was fierce and fast-paced as the two companies approached from two different directions and swept through the startled garrison, while another unit attacked something just as vital nearby – an airfield. After some four hours of combat, including moments when FAPLA fired rocket artillery in vain to stave off the battle’s outcome, the objectives were realized. FAPLA was evicted and put on the run, with over 500 killed and wounded, while ’32’ suffered 13 killed and 22 wounded in fighting a force over four times its size.

After a UNITA occupying force arrived, the battle-weary men boarded their vehicles and headed back toward Namibia, unaware they had scored one of the greatest victories in the history of South Africa. Today, May 21 is viewed with reverence as ‘Savate Day’ by former members of the Battalion, and celebrations have been held for this momentous event in their history.

After Savate, the Battalion continued hit-and-run raids into Angola, but diverted more of their time toward the other threat that kept pestering them… SWAPO.

SWAPO’s intent was to remake Namibia in the image of Angola, using that country as a base of operations High on hope. They operated in mostly small units, using terror tactics for which 32 Battalion proceeded to hunt them down mercilessly. All ’32’ had to do in many cases was deploy their secret weapon: seasoned trackers, the kind of men who knew the African bush better than any man or animal in the world.

Raised in the art from birth and superior to a bloodhound, they picked up the slightest variance of disturbance on the ground and led ambush teams to encampments where many of the guerrillas were killed as they slept. To blend in, white members of the ambush teams painted all exposed skin black so as to not give away the units type at a distance if watched during the day.

All of these tactics paid off, for during this time 32 Battalion suffered minor losses, while SWAPO by the end of the 1980s was having to force unwilling villagers by gunpoint into their ranks. Enemy propaganda often called 32 Battalion ‘The Terrible Ones’ for their brutal efficiency, and the bullet ridden corpses of SWAPO members served as poster children for this.

A classic case of the other side actually unknowingly telling the truth, the Buffalo Battalion, as it was called in South Africa, blossomed into masters of counterinsurgency, but still was able to answer the call one final time as a conventional force, when it ventured back into Angola in numbers to participate in the 1987/88 battle of Cuito Cuanavale. This was a time when another incursion was needed to stop one of FAPLA’s last attempts to destroy UNITA and deny the barren SWAPO’s use of staging areas. The battle ended up raging six months, and was the largest battle on the continent since World War II. The outcome was UNITA surviving, SWAPO losing its staging areas and FAPLA suffering its greatest defeat. Once more, 32 Battalion added another streamer and bucket loads of medals to its history as the decade ended, with Communism beginning to retreat all over Africa.

The 1990s saw 32 Battalion larger in size but less in action due to Namibian independence in 1989 and the breakup of the Soviet Union in 1991. At that point in South Africa’s history, it seemed nothing could tarnish its accomplishments. That was until April 8, 1992, a day that sealed the Battalion’s fate forever, by writing its epitaph in the blood of innocents.

In a town called Phola Park, 32 Battalion was deployed and ended up using live ammunition against several civilians. Images of the dead played all over television and South Africa, going through a touchy transition to the Mandela and African National Congress era, and a commission was ordered to investigate. The findings concluded that an atrocity had been perpetrated, and the unit was ordered disbanded on March 26, 1993, its fantastic record forgotten and members shunned, to be praised and recalled only by those who served within its ranks, one of the greatest fighting forces in the history of the continent.