If we were to cite a single source that generated the attributes of modern day SEALs, and their missions, we wouldn’t need to look any further than the OSS MU. Located in room 3603 of Rockefeller Center in New York, Mr. Donvan began the relentless struggle of centralizing the intelligence community as he went up against the likes of J. Edgar Hoover.

Despite the power struggle which is inherent to the centralization of anything, Mr. Donovan persisted. After several trips to Britain Mr. Donovan began to model Britain’s MI-6 as he created a centralized intelligence capability for the U.S.

In 1942, the COI was retitled the Office of Strategic Services. Under, now General Donovan’s leadership, the OSS began successfully conducting collection operations around the world. As time went by the OSS grew organically and quickly established a Maritime Unit known as the OSS MU.

Besides espionage the OSS MU was also tasked with developing special equipment, tactics, techniques and procedures for other units. A duty very similar to the charter of famed SEAL Team 6 officially known as Developmental Group (DEVGRU).

The OSS MU pioneered the use of swim fins, face masks and closed-circuit diving equipment for military use. Besides the basics they also developed and used swimmer submersibles pioneering the way for modern day Seal Delivery Vehicles known as SDVs. This unit is amazing in itself; but, to consider that they existed in the 40’s makes their capabilities seem unfathomable. Attracting some of the finest Watermen from Southern California the Operational Swimmers of the the OSS began training from Camp Pendleton Ca. From there they moved out to the clear waters of Catalina and then ultimately they settled for the warmer waters of the Bahamas.

These men developed the combat swimming limpet mine attacks used by Navy SEAL’s today. Their tactics, techniques and procedures are taught during the 2nd Phase of BUD/S training and mastered during a SEAL Platoon deployment work up.

In May 1944, the OSS MU was divided into groups. Group 1 became operationally controlled (OPCON’d) by Adm. Chester Nimitz to support his “Granite Plan” for Pacific operations.

Combine the rugged and combat proven nature of the Scouts and Raiders with the technical finesse of the OSS MU and one can see how these two organizations were catalysts sparking the evolution of modern day SEALs.

Missions of the OSS

OSS Detachment 101, the first unit of its kind, was responsible for intelligence gathering, rescuing of downed Allied airmen, producing target packages and the recruiting, training and leading of guerrilla forces.

Beginning in 1943 individuals and small groups would be parachuted behind Japanese lines to infiltrate small villages and recruit guerrilla forces.

Once on the ground these dynamic spies would organically grow resistance Armies as large as 3,000 strong to conduct Unconventional Warfare (UW) against the Japanese. 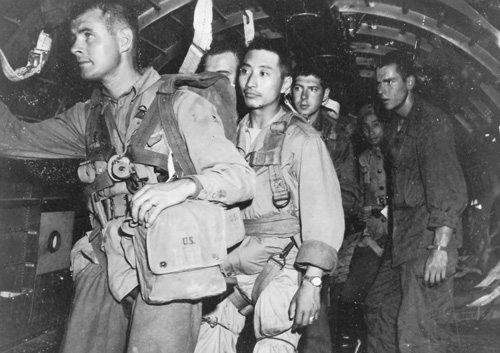 101 was credited with 5,428 enemy kills and the rescuing of 574 Allied personnel. Impressive standards setting the bar for today’s Special Forces.

The OSS, in the ultimate execution of Spy craft had constructed a 24,000 person operation in the heart of Nazi Germany. Employing Germans, Austrians, anti Nazi POWs and Jewish refugees the OSS significantly impacted World War II tilting the odds forever in the favor of Allied forces. The “Man” of The OSS

Sometimes the account of a single person’s contribution to anything is the best the best way to understand it.

Walter Mess was one of General Donovan’s best. Four years prior to World War II, Mr. Mess was recruited by Mr. Donovan. This occurred during the time Mr. Donovan was in private law practice and was considered a “private” secret agent.

In 1938, Mr. Mess was dropped into Czechoslovakia where he recruited, and then brought to America, four teenagers for training and reinsertion as agents of the U.S.

In 1943, Mr. Mess became an official OSS operative and the Maritime Unit’s “Flotilla Officer Commander.” Mr. Mess, with his PT Boat P-564, conducted over 36 missions across the Bay of Bengal ferrying Swimmer teams and rescuing over 220 downed airmen from Escape and Evasion (E&E) points on the Burma coast.

April of 1944 Mr. Mess’s PT boat became the primary water platform for the OSS’s Operational Groups and Secret Intelligence missions. It was at this time that some of the first underwater missions were conducted.

In 1945 Mr. Mess was transferred to Det. 404 and conducted over 15 parachute jumps supporting OSS teams in Burma and Thailand.

In all of my research I can think of no other unit or individual that represents the genesis for modern day Navy SEALs better than this man or the OSS.