Editor’s Note: Geo’s memoir, “Brothers of the Cloth,” a true account of special mission unit soldiers, has sold out in hardcover and will soon be coming out in paperback! You can keep an eye for it here.

During my nine months in-country hunting drug cartel kingpins in Colombia, the country held its presidential elections. My three-Operator team and I were sent back to the U.S. until the elections were over, and the incumbent’s policies supported having gringos back in-country hunting its drug lords. It seemed legit, and I was ready for a break somewhere where yucca root was not the meal staple — a burger was in order!

During the couple of weeks I was back, my Squadron Sergeant Major lamented to me with words to the effect:

“Geo, we need to swap you out with someone else on that mission. You’ve just been gone waaay too long and you’re missing too much training.”

I took a moment to press-check my pulse and count backwards from 10 to assess my cognizant function.

“Training, Sergeant Major? Training? I’m operational in South America hunting drug lords. Training is the thing you do for years to get to where I’m at right now. But, go ahead and replace me. Let’s see… the only other Spanish speaker you have is Wookie, and he is already on my team along with Thor from B squadron — their only Spanish speaker.”

Now, I’m not usually that monumental in my asshole-ery, but the Smadge’s logic seemed to flip-flop like a computer logic gate out of sync with the system clock.

The elections were held. The same president won and his policy regarding the Great White Hunters carried over to his new tenure. Back to the hunt I went — the Wookie, Thor, and me.

When I pulled that mission completely out of South America and returned to my squadron, it was a cinch to fall in-step again with the pace of the brothers, albeit being 20 pounds lighter. It was easy because the squadron’s fast train had continued to speed along without me, and coming home it was just a matter of — alll aboard!

But what happens when the entire squadron is plucked from its training cycle to suddenly go operational together? Coming back, the training calendar is trashed; all the scheduled training plans — the trips away to special skills schools and the like — are all canceled and the squadron operations cell has to gin up some new activities really fast.

Such was the case when A squadron was scrambled same-day of alert to Mogadishu Somalia to shore up the efforts of our C squadron. Upon return to Bragg, we essentially had nothing planned. I mean we could gin up endless training right there on our totally self-sufficient little city of a compound in the pine woods of Bragg, but operations asked us to all come up with hip-pocket training ideas that took us away from Bragg.

“Good-Deal” Samuel Booth Foster immediately piped up with the best good deal trip just off the top of his head —”Let’s go on a scuba diving trip to Key West Florida!” That stuck fast and hard. There were seven of us in the squadron who were Combat Diver qualified from Key West, Sam and I having served there as cadre prior to Delta. We could get support from the dive school and honing our special skills was justification enough to let us go. 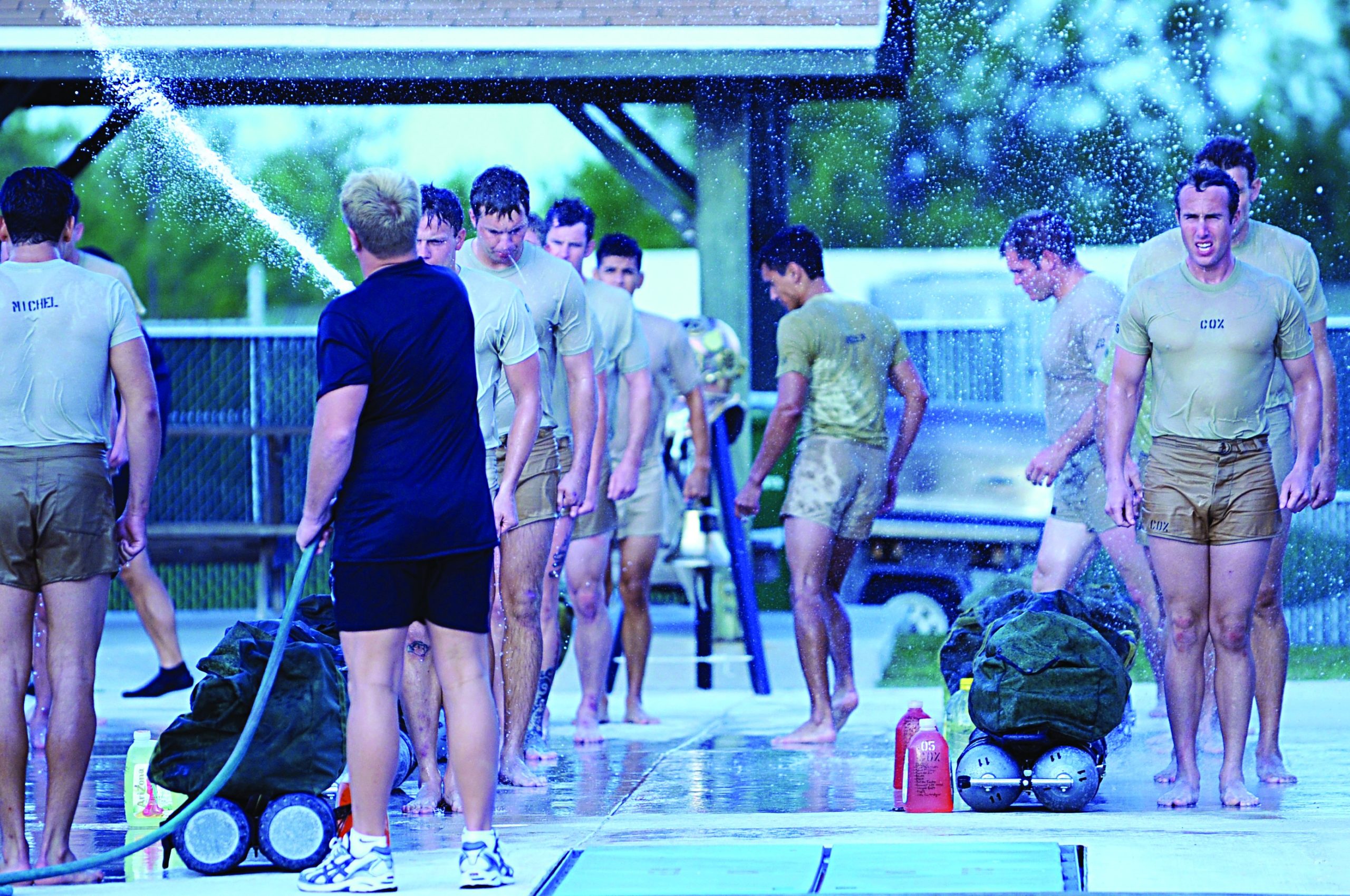 Being the wet blanket that I was, I lamented to Sam that it seemed like a boondoggle trip with no real merit, and perhaps just a sukoshi north of being dishonest. Good deal Sam, bad deal scram-Sam — without the slightest hesitation because hesitation was not in Sam’s composition — rationalized his thinking to me thusly:

“Geo… look at what the hell you just did this month. It’s ok to take a break once in a while. I mean… one time them, one time us — go on a combat deployment for the country, go on a scuba junket for yourself. Uncle Sam’s pockets run deep, homes… he’ll recover from this excursion.”

Finally, it all seemed to make sense to me after a quick mental inventory of the two axiomatic truths that defined Samuel Foster:

1. Sam is smarter than all living things

2. Don’t ever (EVER) endeavor to reason or trade wits with Sam.

“Just take a deep breath and relax, Geo; this will all be over soon… very very soon.”

Sam had always been hard to argue with even before Somalia. After Somalia he was impossible to counter, as I had seen him in a pristine psychopathic state, quintessentially devoid of fear while under fire. Where I had flailed incoherently for cover in a mortar attack, Sam walked calmly and deliberately to cover and concealment while wearing the exact same expression that he wore that very morning while sipping coffee in the mess tent.

A mag light shined through the “cover” I had dived behind. It was Sam’s maglight and he was shining it through my “cover” to demonstrate that I had taken cover behind a thin veil.

“You do realize this protective barrier of yours is a mosquito net, don’t you Geo? I mean, do you feel safe back there? Because if you do feel safe I’m totally fine with it — hhhhhah ha ha ha.”

I wanted to punch him in the face as hard as I could.

“Did you see the size of the hole in Matt’s head? He was dead before he hit the ground.”

Now I wanted to punch him in the face even more than just a minute ago; Matt had been a longtime friend of mine; we had both gone to dive school together.

Sam and I were both certified Dive Supervisors, meaning we had the authority to plan and execute dive operations with military divers. Sam was, in fact, a Dive Medical Technician (DMT) being that, by origin, his Military Occupational Specialty (MOS) was 18D, Special Forces Medical Sergeant. A Dive supervisor and DMT were all we needed to execute our dream Scuba Diving vacation…

We got a tremendous discount from a brother, Jeff B., who both Sam and I knew well from our days together as instructors at the dive school. Jeff had retired from the Army and stayed right there in Key West owning and operating a commercial charter boat for tourist excursions. All of our air tanks and dive equipment were free of charge on loan from the dive school; it was a standard respectful courtesy that the school extended to all of its alumni — fuckin’ SF!

By doctrine, Sam couldn’t perform both Dive Supervisor and DMT duties simultaneously, and I wasn’t a DMT, so I was the permanent supervisor for all the dive operations and Sam was the DMT. I can tell you, I didn’t like being the supervisor for this pack of clowns. Everything was a big joke because we were on vacation after all. For me, diving was still serious business and I was responsible for the safe conduct of all the dives no matter how big of a joke they were.

A couple of more spirited warriors had hit the bottle kind of hard the night before and sported a mightily nice hangover that morning. That right there was just the wrong condition to be going under compression and breathing pressed air. I wanted to bail hard on the supervisory role, but we were using military gear so I was trapped — like a rat!

“This will all be over soon, geo… very very soon.”

At some point en route back to shore post during the first day’s dives, one of the brothers gestured to Cuz, another brother lying on the deck. He happened to have been one of the Bacchus boys from the night before. Upon hearing the symptoms that our no-feel-good guy was experiencing I felt only compelled to reply:

“Well, shit me! I’ll be rolled in gunpowder and shot from a cannon — so, sounds like symptoms of the Bends (Decompression Sickness), and I thought I heard the distinct sizzling sound of my goose being cooked.”

I sent Good-Deal Sam over to assess Cuz for the Bends. We were going to have to get him to a Hyperbaric Treatment Chamber; luckily (LUCKILY) the dive school operated the only one from Key West to Miami. After a lengthy assessment, Sam returned to me, and he had brought along his usual cavalier smug face.

“His pussy hurts but he’ll be fine. I suggest we ground him this evening and make him go beddy-by early,” was Sam’s snottily-delivered but wise and spot-on suggestion.

After the last dive, as I was exhaling in relief, Sam reported that brother Cuz was having trouble with equalizing pressure in one of his ears. In fact, the dilemma was not like the painful pressure of ears that will not clear down at depth; his ear had cleared at depth and equalized with his sinuses, but it had failed to equalize again during ascent. He had what Sam described as “reverse diver’s ear squeeze.”

It seemed comical to me at face value, but at another face value — Cuz’s facial expression — it was no triffle: Cuz was in magnificent agony. The prognosis was that Cuz was going to have to remain horizontal for a period of time until the pressure in his middle ear finally equalized with ambient pressure. That meant that there was no way he was going to be able to fly back with us the next day.

We all flew out the next day leaving one man to stay behind with Cuz. But the one man who should have stayed with him — Sam — who was qualified to treat him sure as hell wasn’t going to stay back with him, nosirree-Bob! That just wouldn’t have been a good enough deal. And as the saying went: “Good deal — Sam; bad deal — scram!”