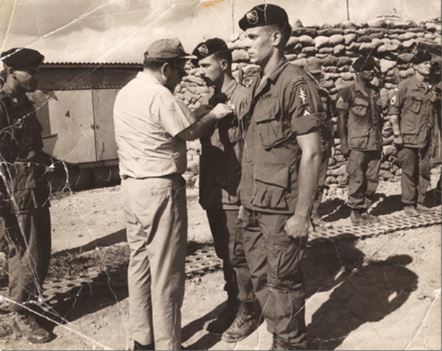 Gordon Yntema was just 22 years old at the time of his death, but he was a Green Beret assigned to the 5th Special Forces Group Airborne, ODA-431 and was awarded the Medal of Honor for bravery while fighting in Vietnam in 1968. The enlisted men’s club was named in his honor on Ft. Bragg.

Yntema was born on June 26, 1945, in Bethesda, MD. He graduated high school from Holland, MI and entered the United States Army on July 10, 1963, in Detroit, MI. He volunteered for and passed the Special Forces Qualification Course. In October of 1967, he was assigned to Vietnam as part of Company D, 5th Special Forces Group Airborne, 5th SFG(A) and stationed with ODA-431 at Camp Cai Cai, in the Plain of Reeds as an Operations and Intelligence Sergeant. Camp Cai Cai was a frequent target of Vietcong mortars and artillery since it opened in April of 1965. The camp also flooded twice in 1965 and 1966 and was rebuilt as a floating camp. On January 16 and just prior to the Tet Offensive, Yntema was an American advisor accompanying to companies of CIDG (Civilian Irregular Defense Group) strikers as they became embroiled in a two-day firefight with Viet Cong troops.

The senior American and South Vietnamese commander were wounded in the fighting. Yntema took over as the CIDG strikers tried to conduct blocking positions east of Thong Binh. Under heavy fire from Viet Cong bunkers, Yntema advanced the strikers to within 50 meters of the bunkers before being forced to withdraw to a trench line.

The Viet Cong deployed a company to the flanks, taking the strikers on three sides with intense fire, which included accurate mortar fire which caused several casualties. The strikers began to pull back. Yntema, already seriously wounded himself, refused to abandon his wounded commanders. He carried them to a gully about 50 meters away to shield them from enemy fire.

With his ammunition gone, the Cong tried to take him as a prisoner. But Yntema was going to be captured.  He turned his rifle around like a club and took on the 15 Viet Cong who were attempting to capture him. So intense was his fighting the Viet Cong were forced to shoot him.

His body was returned home to the U.S. and he was buried at Pilgrim Home Cemetery in Holland, MI. He left behind his young wife Peggy and two young daughters.

Gordon’s decorations include the Medal of Honor, the Silver Star, two (2) Purple Hearts, the Combat Infantry’s Badge, and the Parachutist’s Badge.

A 1966 Army video of the camp at Cai Cai and the camp’s defenses are shown here:

An interesting side note about Cai Cai, Sean Linnane wrote an interesting blog post about Martha Raye, the entertainer who would visit the SF troops in Vietnam in places most entertainers would never venture in.

Colonel Maggie was visiting the A and B camps of D Co in the Delta and the S-4 Air Ops was assigned to be her escort officer. She had visited Cai Cai A-431 and moved on to RON somewhere else. They were hit that night. When she heard the news the next day, she ORDERED her slick to go back to Cai Cai so she could see if they needed her. She was a qualified nurse. The escort radioed back for instructions and IIRC, the CO (Colonel Bob Hassinger) said HE wasn’t going to countermand Maggie and he didn’t think it would be a good idea for anyone else to try either. She ALWAYS put the men first.

For conspicuous gallantry and intrepidity in action at the risk of his life and above and beyond the call of duty. Sgt. Yntema, U.S. Army, distinguished himself while assigned to Detachment A-431, Company D.

As part of a larger force of civilian irregulars from Camp Cai Cai, he accompanied 2 platoons to a blocking position east of the village of Thong Binh, where they became heavily engaged in a small-arms firefight with the Viet Cong.

Assuming control of the force when the Vietnamese commander was seriously wounded, he advanced his troops to within 50 meters of the enemy bunkers. After a fierce 30-minute firefight, the enemy forced Sgt. Yntema to withdraw his men to a trench in order to afford them protection and still perform their assigned blocking mission.

Under cover of machinegun fire, approximately 1 company of Viet Cong maneuvered into a position which pinned down the friendly platoons from 3 sides. A dwindling ammunition supply, coupled with a Viet Cong mortar barrage which inflicted heavy losses on the exposed friendly troops, caused many of the irregulars to withdraw.

Seriously wounded and ordered to withdraw himself, Sgt. Yntema refused to leave his fallen comrades. Under withering small arms and machinegun fire, he carried the wounded Vietnamese commander and a mortally wounded American Special Forces advisor to a small gully 50 meters away in order to shield them from the enemy fire. Sgt. Yntema then continued to repulse the attacking Viet Cong attempting to overrun his position until, out of ammunition and surrounded, he was offered the opportunity to surrender. Refusing, Sgt. Yntema stood his ground, using his rifle as a club to fight the approximately 15 Viet Cong attempting his capture. His resistance was so fierce that the Viet Cong were forced to shoot in order to overcome him.

Sgt. Yntema’s personal bravery in the face of insurmountable odds and supreme self-sacrifice were in keeping with the highest traditions of the military service and reflect the utmost credit upon himself, the 1st Special Forces, and the U.S. Army.