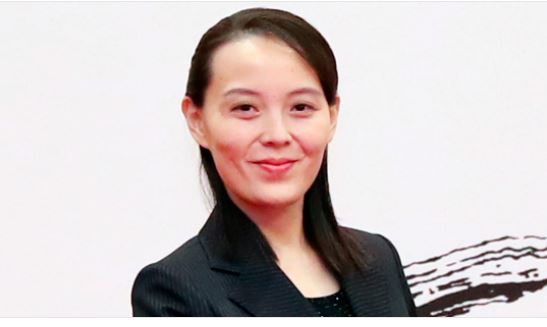 If there is a bigger head-scratching moment out there right now, please inform the world. Kim Yo Jong, the younger sister of North Korean dictator Kim Jong Un has been representing her brother and the regime at the 2018 Olympics at the PyeongChang Games. Yo Jong has smiled, and shook hands and played the part of the young smiling face of the regime in front of the world and they are lapping it up.

The western media as a whole has been totally reporting on the North Korean propaganda reports as if they were the official news service of the North’s government. Kim Jong Un has to be extremely pleased. The words used to describe Yo Jong’s dance at the Olympics have been,“ stealing the show” with the benefit of “her warm smile and message.” And the kicker was that she was “earning a gold medal for her diplomatic dance.” These are being reported by American journalists.  But the fact that his sister is wooing the masses there would be funny if it were not so scary.

And scariest of all, the South Koreans are buying it. The same ones who live right next to one of the most repressive regimes in the world and constantly have to worry about the next missile launch, as Jong Un fires ICBMs into the Sea of Japan with the care a 12-year old playing with Roman candles on the 4th of July.

The official South Korean news agency, Yonhap reported that Yo Jong was  “wearing a wine-colored jacket and black pants,” at a dinner as if she were a member of the Hollywood elite’s beautiful people, instead of what she truly is.

Yo Jong is a member of the North’s Politburo and is the deputy head of the Propaganda and Agitation Department. Reportedly she’s one of the very few trusted advisors that the dictator Jong Un has and she has run interference for him, being the advance party prior to his appearances.

And her position within the Propaganda Department has been well-served in the last few days. She’s smiled and said the right things and then wrote in a guestbook message that, “I hope Pyongyang and Seoul get closer in our people’s hearts and move forward the future of prosperous unification,” she penned.

She is the first member of the ruling family to visit South Korea since the Armistice was signed in 1953. That shows the trust that Kim Jong Un, who is as untrusting as anyone alive has in his sister. And she’s totally won over the media in a brilliant move. The North has done its homework in the manner of winning over the Korean people and the international media.

Even western analysts are dropping the ball here. One called Yo Jong’s appearance, the answer to having Ivanka Trump representing the U.S. for the closing ceremonies. Another, Ken Gause was quoted by CNN as saying, “And it also is a signal that North Korea is not this crazy, weird former Cold War state — but it too has young women that are capable and are the future leadership.”

Except that it IS a crazy, weird Cold War state. The North still has gulags where thousands of people get sent for the slightest infractions. Kim Jong Un is a paranoid dictator who will kill hundreds in public executions if he feels even the slightest bit of uneasiness from his people. He’s executed senior party officials and even had his own half-brother assassinated in an airport last year with a VX nerve agent.

The North Korean people have no fundamental human rights of any kind. No freedom of expression, of the press, or any outside communication. If a North Korean citizen is found in possession of a cell phone, they risk being sent to a prison camp.

Thousands of citizens starve to death or die of disease every year in the north. Kim Jong Un survives all of this because the people are completely controlled by the party, which is him. And his sister, “The Ivanka Trump” of North Korea is in it up to her neck.

It is not at all surprising that the western press has forgotten about Otto Warmbier. He was visiting the North in 2016 when he was arrested and charged with attempting to steal a propaganda poster from his hotel. He was sentenced to 15 years of hard labor where he was tortured so bad in 17 months, the North Koreans shipped him home in a coma, where he died a few days later. His “hostile acts”, the supposed theft of a propaganda poster cost him his life.

The only cracks we saw into what really lies behind the smile was when the South sat her next to U.S. Vice President Mike Pence. The two didn’t shake hands, smile blankly at one another or even make eye contact. But when Pence was cheering the U.S. squad marching by, Yo Jong gave him the side eye. If looks could kill…

That is the North Korea of Kim Jong Un and his sister Kim Yo Jong. But the western press will keep smiling and repeating their propaganda verbatim for the North like good little “useful idiots”, right up until the next missile launch. Hopefully, that one too will end up in the Sea of Japan and not on a western city.