On this day in 1961, the 5th Special Forces Group Airborne, 5th SFG(A) was activated at Ft. Bragg, NC. A happy 56th birthday to “The Legion” and the men assigned to it both past and present.

The 5th SFG was made famous by their exploits during the war in Vietnam but during the next generation, the Group has served with distinction in both Desert Storm and the Global War on Terror (GWOT).

Headed to Southeast Asia: Less than a year after being activated, the Green Berets of the 5th SFG would begin their long service in the Republic of Vietnam. First with teams going over on temporary duty assignments but later, the Group would move its headquarters there in 1965. There the Group would remain until the drawdown of troops from Vietnam and the unit would return to Ft. Bragg, NC on March 5, 1971.

During the war in Vietnam, 5th SFG(A) would set up its headquarters in Nha Trang and Green Berets were tasked to set up camps in all four regions of the country. Green Berets from 5th SFG(A) setup over 270 camps manned by the CIDG (Civilian Irregular Defense Group), local indigenous forces who were from the mountain tribes (Montagnard) of Vietnam. The CIDG camps were arrayed mainly along the border regions where they could provide reconnaissance of North Vietnamese forces infiltrating the country along the Ho Chi Minh trail, and harass and interdict the enemy’s supply lines heading into South Vietnam.

The CIDG camps also had their own indigenous quick reaction teams trained by Green Berets of the 5th SFG(A), the Mike Force. These mixed units of American and Montagnard tribesmen could be alerted and sent to any A-Camp to help secure, reinforce and recapturing any CIDG camps run by Special Forces. They also provided excellent special reconnaissance capabilities as well as search and rescue for downed pilots and search and destroy missions against the enemy.

The 5th SFG(A) also provided a lion’s share of personnel for the MACV-SOG (Military Assistance Command Vietnam – Studies and Observation Group. These highly classified, multi-service, special operators conducted some of the most covert, unconventional warfare operations of the war. SOG’s mission was “to execute an intensified program of harassment, diversion, political pressure, capture of prisoners, physical destruction, acquisition of intelligence, generation of propaganda, and diversion of resources, against the Democratic Republic of Vietnam” SOFREP’s own John Stryker Meyer was a member of SOG and many of his articles can be found on the subject of their operations.

During the war in Vietnam, despite being one of the smaller units assigned there, the Special Forces units there are among the most decorated units in our nation’s history. The Group was awarded 14 campaign streamers to fly on the unit’s colors.  Eighteen, (soon to be 19), members of SF were awarded the Congressional Medal of Honor. Nine of them were awarded posthumously. In addition, there were numerous other awards given to the members of the 5th SFG, They include:

Post-Vietnam Service: In the period following the Vietnam war, the 5th SFG(A) remained at Ft. Bragg until the late 1980s when they moved to Ft. Campbell, KY.

Just a few short years later, the 5th SFG(A) deployed to Southwest Asia, after the Iraqi invasion of Kuwait in the summer of 1990. During Operation Desert Shield and the follow-on combat operations of Operation Desert Storm, SF members of the Legion conducted Foreign Internal Defense,  Special Reconnaissance, Direct Action, and Combat Search and Rescue Missions.

The 5th Group would also provide “Coalition Support Teams” to every allied nation in the desert. General Norman Schwarzkopf would call these “the glue that held the coalition together.” It was a classic case of the value of Special Forces troops in building rapport and being culturally attuned to the allied nations.

The Legion was also active with humanitarian and security enhancement missions in Somalia, Kosovo, and Bosnia during this time.

Horse soldiers: Immediately after the bombing of the World Trade Center and the Pentagon during 9-11, the 5th SFG(A) was preparing to strike back at the Taliban. Just 39 days after the planes struck the WTC, two ODAs (Operational Detachment Alpha or SF A-teams) ODA-555 and ODA-599 flew 11 hours in MH-47s and landed in Afghanistan as part of Task Force Dagger. There, severely isolated from friendly US forces, the A-teams made contact with the Northern Alliance and began conducting unconventional warfare operations against the Taliban. 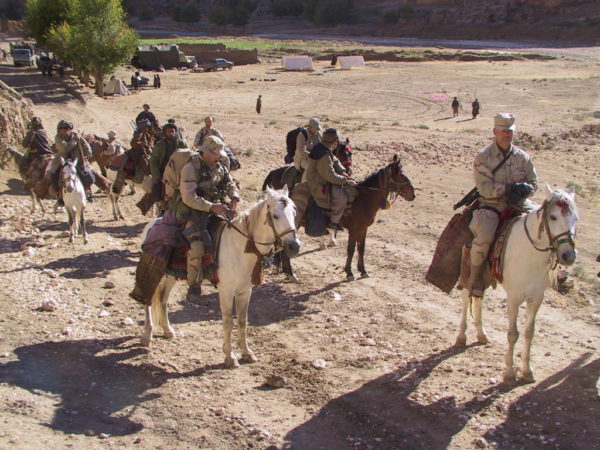 There the SF men became the first US Army soldiers to fight on horseback since early 1942. The Northern Alliance used horses because that is all they had and the terrain and lack of roads lent itself more effectively to animal transportation. The iconic images of the 5th SFG(A) troops attacking the Taliban on horseback have been made into a sculpture that now resides at a World Trade Center Memorial in New York City. Less than a month later, there were 10 A-Teams operating inside Afghanistan. Together the SF troops with Air Force Combat Controllers and Northern Alliance fighters they routed the Taliban from Afghanistan in less than two months, using precision-guided ordnance, the US Air Force brought heavy damage to Taliban positions and equipment.

5th SFG troops returned to Ft. Campbell but not for long. The entire Group was also heavily involved in Operation Iraqi Freedom and the subsequent second invasion of Iraq. Members of 5th Group assisted in the capture of Saddam Hussein.

Green Berets from the 5th SFG are today still actively engaged against terrorist and insurgent forces in Iraq, Afghanistan, and Syria. The Legion’s reputation continues to grow as the next generation of SF troops are carving out their own identity.