In 1989, NATO published a set of requirements that requested a new type of firearm with rounds capable of penetrating body armor. Called the Personal Defense weapon, or PDW, it was meant to replace weapons, such as pistols and submachine guns, whose caliber was found wanting against ballistic protection. Several companies went on to design PDWs, with the most successful, if not the most visible version, coming from German arms company Heckler & Koch.

Designated the MP7, it was first displayed in 1999, with H&K officially beginning production of the weapon in 2000. The MP7 is a compact firearm that uses polymers extensively in its construction, and a short 7.1 inch barrel that helps keep the weight at 4.1 pounds.  For ease of carry, a sliding stock provides a length of 25.1 inches extended and 16.3 inches closed. Iron sights for back up compliment mounting rails for sights, lights and lasers, etc., atop the length of the receiver and both sides of the forearm. A front grip that folds under the forearm is also standard.

Internally, its operation is based on the short stroke piston design of the G36 assault rifle, another H&K offering, and helps ensure that the round, which is unique to this weapon, functions reliably. And it is this round which may be the most intriguing part of the MP7.

Featuring a cartridge that measures a diminutive 4.6x30mm, first impressions might lead one to dismiss it as insufficient. Nonetheless, looks can be deceiving, and in this case keep in mind it is meant to defeat body armor. In this role, it is successful.

There are three types of rounds in widespread use. All feature specially designed penetration abilities, which range from the standard DM11, a 31 grain copper plated solid steel AP projectile; the DM21, a 46 grain steel jacketed lead core FMJ round; to the improved DM31  grain copper washed steel jacketed solid steel AP round. These can penetrate several layers of woven Kevlar fabric, with the DM11 traveling at a muzzle velocity of 2,362 fps able to pass through 20 layers backed by a 1.6mm titanium plate at 200 meters.

Events after September 11, 2001 sent the MP7 into the field and it became an instant hit. Through the years, numerous worldwide Special Forces and police units adopted it, one of the most famous being the U.S Navy’s DEVGRU, better known as Seal Team 6. The weapon has seen use in Iraq, Afghanistan, and likely numerous classified operations during the War on Terror.

In 2003, H&K improved upon the design and a new version appeared called the MP7A1. This is the variant produced today, and features a redesigned pistol grip, stock and integral trigger safety like those found on Glock pistols. As of 2014, military and police units of 17 nations employ the MP7 and MP7A1. Without a doubt, it is one of the most popular PDWs in the world today, with its closest competitor being the Fabrique National P90 in 5.7x28mm. FN’s PDW holds the lead in adoptions due in part to a 10 year head start in production. Regardless of this, it is not unreasonable to expect H&K’s weapon to close the gap in the coming years. 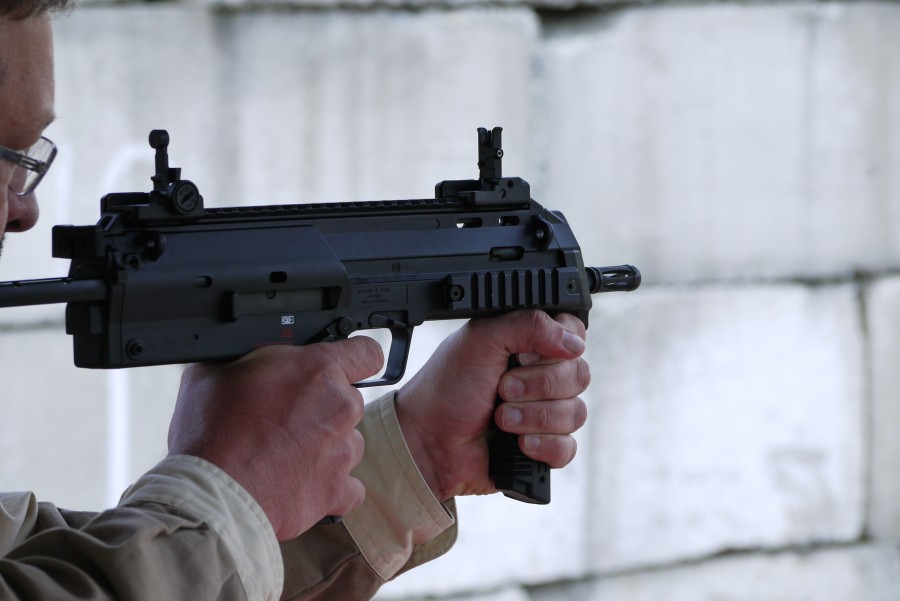